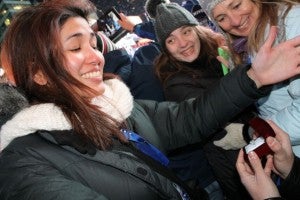 He puts a ring on it as Jia Salindong expresses shock and joy.

NEW YORK—And they kissed as the crystal ball touched down and nearly 2 million people who were gathered at Times Square erupted in euphoric cheers to welcome the new year.

Jia Salindong was still excitedly taking in the moment when her boyfriend of five years, 26-year-old human resources executive Daniel Du, was on his knees, asking: “Will you marry me?” She remembered being in a split-second freeze and it’s not from the cold.

“I was shocked, I could not believe it’s happening” Jia from Antipolo told The FilAm. “So I said ‘yes, of course’.”

Around them, people were also kissing and hugging one another as alert police officers stood by reining in their sniffing dogs.

It was a complete surprise for Jia. She recalled how Daniel kept pestering her on what they should be doing during the countdown. 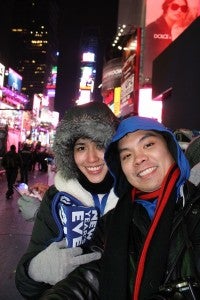 On their fifth year, Daniel Du and Jia Salindong take it to
the next level: a New Year’s Eve engagement.

“I offered to hold the videocam and shoot the ball drop,” she said. And when the clock struck 12 midnight, “I turned around and saw him ‘nakaluhod na holding a box!’”

Jia replied yes, but had to say it again and again because of the cacophony around them making it difficult for Daniel to hear it the first time. The revelers immediately around them were cheering for them, and filming the proposal on their videocams.

Daniel said he has been planning the dramatic proposal back in July.

“I couldn’t compose myself especially moments after the ball drop, I wasn’t sure if I had to make a speech or ask her right away.”

Jia confessed to shedding tears of joy. It’s been five years and they remain very much in love, she said. Daniel, a Canadian citizen, had asked Jia’s mom for her blessing before they departed from Manila.

Daniel and Jia met at the Ateneo de Manila, where both were studying management time in New York but first time to see the ball drop,” said Daniel.

Both worked engineering. “We were blockmates,” she said.

“It’s our second for a Fortune 500 company in the Philippines. This three-week trip had long been their plans. In California, they were all over Hollywood. In New York, the iconic ‘ball drop’ was in their must-see destination.

“We’ve spent Christmas and our five-year anniversary here (in New York) on December 30,” said Jia, who is a country marketing manager for the same company as Daniel’s. “We were looking forward to see snow, it’s our first winter.”

Daniel described the best qualities of his future wife: Jia is driven, independent, and “ma-discarte.”

The hours-long program began at 3 p.m. People began converging between Broadway and 7th Avenue in early afternoon. By 6 p.m. everyone should be in place: No sneaking in and out of the police barricades for snacks or pee breaks. The only people allowed in at any time are those checked in at the nearby hotels. Adjoining streets were sealed off to vehicles, but pedestrian traffic remained open but jammed with tourists and locals.

This year as in previous years, the ‘ball drop’ has been an orderly celebration, despite the occasional terror threats to the city. Mayor Mike Bloomberg and the NYPD make sure the event goes on without incident and that everybody has a great time. But they asked that everyone follow the rules, including submitting to the random bag checks.

Daniel, who couldn’t believe he was able to pull off a high-anxiety marriage proposal, said he is pleased. “I’m tired, but happy.”