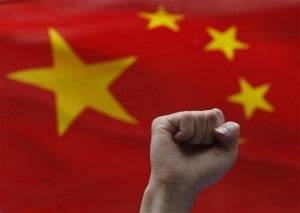 MANILA, Philippines – Amid heightened tensions in the West Philippine Sea (South China Sea) disputes, a state-owned Chinese news agency has called the Philippines a “trouble maker in the region,” and warned the country against losing its “credibility” if “Manila insists on playing more tricks.”

In an editorial entitled “Manila’s miscalculation” published on Wednesday, the China Daily hit Foreign Affairs Secretary Albert del Rosario for saying that the Philippines would support Japan dropping its pacifist constitution to become a fully-fledged military force and act as a balance against a rising China, saying that the statements bared “Manila’s attempt to enlist support for its disputes with China.”

“As a smaller country, it has resorted to opportunism to balance the big powers. However, if it goes too far, it will have to shoulder the consequences,” the editorial read.

“History shows us small countries tend to get the worse of it if they seek to hijack regional peace and stability as a bargaining chip. If Manila insists on playing more tricks in this regard, sooner or later it will have to pay a dear price and lose its own credibility in the region,” it added.

Department of Foreign Affairs spokesperson Assistant Secretary Raul Hernandez, when pressed for comments, questioned why the Philippines was being called the trouble-maker, saying that the recent actions of China in relation to its nine-dash sea claims have raised concerns for the international community.

Hernandez said that such actions were inconsistent with international laws, especially the United Nations Convention on the Law of the Sea, and impede the fundamental freedom of navigation and lawful commerce.

In an interview with London’s Financial Times, Del Rosario said the Philippines would strongly support a rearmed Japan—its World War II enemy—as a counterweight to what it sees as Chinese provocation.

China claims nearly the entire West Philippine Sea (South China Sea), believed to be rich in oil and gas resources, while the Philippines, Brunei, Malaysia, Taiwan and Vietnam, have overlapping claims to some or all of those same areas.

Recent weeks have seen a rise in tensions in the sea disputes, with the Philippines asking China to clarify media reports saying Chinese authorities had authorized its forces to interdict ships entering what Beijing considers its territorial waters.

DFA spokesperson Assistant Secretary Raul Hernandez, meanwhile, had earlier said that when asked what the Philippines wanted Japan’s role in the region to be, Del Rosario replied that the country wanted Japan to “support a peaceful process in solving issues here and to be one of the partners as far as security alliances and partnerships are concerned.”

Hernandez said there were no talks going on between the Philippines and Japan.

The editorial also said that Manila was “deceiving” itself if it believed it could count on support from countries like the United States and Japan, adding that it was also “apparently underestimating China’s resolve to defend its sovereignty and core interests.”

It also decried Del Rosario’s move not to hesitate in helping Japan “revive the dying ember of militarism,” saying that “his remarks only played into the hands of Japanese right-wingers who have been clamoring to break the limits of the country’s pacifist constitution.”

The editorial also made mention of the Japanese occupation of the Philippines during World War II, saying that “memories of Japan’s military past are still fresh.”

“For Asian countries victimized by Japanese aggression in World War II, normal ties with Japan are possible only under the condition that the country sticks to a pacifist road. Del Rosario’s rhetoric has touched the bottom line of peace and order in Asia,” it said.

The editorial also accused the Philippines of playing the “role of a trouble maker” in the region, citing its moves to unilaterally raise sea disputes with China since April.

“While coveting territorial waters it is not entitled to, it has played one trick after another seeking confrontation with China. Its politicians have developed a penchant of talking tough on China, as if wild talk will make the country’s daydreaming come true,” it said.

Manila has called for a multilateral approach to dealing with the sea disputes, as well as peaceful resolutions in accordance with international law, but China has insisted disputes should be dealt with using bilateral negotiations.