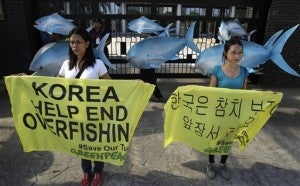 Environmental activists hold banners as others depict a school of tuna during a rally outside the South Korean Embassy in suburban Taguig, south of Manila, Philippines on Nov. 29, 2012. Efforts to curb overfishing of tuna in the Pacific were blocked by big countries that refused to cut their catch at a meeting of tuna-fishing nations in the Asia-Pacific, delegates said Thursday, Dec. 6, 2012. AP PHOTO/AARON FAVILA

MANILA, Philippines—Efforts to curb overfishing of tuna in the Pacific were blocked by big countries that refused to cut their catch at a meeting of tuna-fishing nations in the Asia-Pacific, delegates said Thursday.

The commission had hoped to address concerns that many tuna species were being fished beyond sustainable levels in the Western Pacific, a region that produces more than 50 percent of the world’s tuna catch.

However, Palau fishing official Nanette Malsol said many big nations refused to cut their catch, especially of bigeye tuna, which the commission said should ideally have its catch reduced by 30 percent.

Malsol, who also chairs the Parties to the Nauru Agreement, a coalition of small Pacific island nations, blamed the European Union, the United States, Japan and many Asian nations for taking most of the adult bigeye tuna with “longline” fishing vessels.

Only China agreed voluntarily to cut its catch by such vessels by 10 percent while South Korea and Taiwan both agreed to cut theirs by two percent, Malsol said.

Garry Leape, head of the delegation of the US-based Pew Environment Group, said he welcomed some measures taken at the Philippine meeting.

This included an agreement to extend to four months, a three-month annual ban on the use of “fish aggregating devices” or FADS, floating devices that lure fish, making it easier for boats to haul them in.

FADS also result in catching of juvenile tuna and other threatened species such as sharks, rays and sea turtles, environmentalists said.

The commission also agreed on a measure to avoid catching whale sharks in tuna nets.

But Leape said the country delegations were only interested in protecting their individual interests rather than working together to prevent the depletion of tuna stocks.

“It seems inevitable that, given these management decisions, we will again sit down and discuss an overfished stock in an even worse state than today,” he said in a statement.

Because tuna is a migratory species that crosses country boundaries, cooperation is crucial to sustaining the resource, experts said.