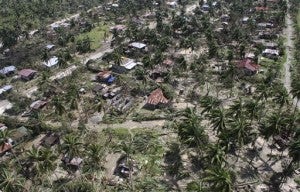 In a statement, the UN Office for Disaster Reduction (UNISDR) praised the “improved performance” of the country’s early warning systems.

“This time last year over 1,400 people died [from Tropical Storm “Sendong”] in Mindanao in a similar event but this time big improvements in the early warning systems have saved many lives,” said UNISDR’s regional office for Asia.

“The Philippines is hit by about 20 typhoons each year so this is vitally important. It is also evident that since we met with local mayors in Mindanao earlier this year, practical measures have been taken on the ground to improve the alert system and communication with affected communities,” he added.

Witnessing the benefits of technology in preventing casualties at the height of Pablo, the government is set to invest more money to “advance the technology for weather forecasting,”  Interior Secretary Manuel Roxas told officials at the regional post-Pablo assessment in Cagayan de Oro City on Thursday.

Roxas said foremost in the government’s plan was to buy state-of-the-art sensors for water levels and rain volume.

He said the water level sensors and rain gauges installed in the headwaters of Cagayan de Oro River, for example, were able to send real-time data to Project Noah’s headquarters. The information was circulated among disaster risk-reduction and management councils in the region.

Roxas, however, said that President Aquino was a bit disappointed with a Doppler radar’s range of only 300 kilometers.

“The immediate solution is for the government to buy available weather information equipment and systems from solutions provider like the United States Geographical Services or the Japan Meteorological Agency,” Roxas said.

Project Noah’s executive director Alfredo Mahar Lagmay, in a telephone interview, said he was glad the government saw the importance of disaster preparedness and mitigation.

Roxas said the government was planning to distribute information from government agencies involved in disaster preparedness via smartphones and was looking into the possibility of making every town in the country connected to the Internet. Reports from Tarra Quismundo in Manila; Orlando Dinoy, Danilo Adorador III, Aquiles Zonio, Ryan Rosauro and Bobby Lagsa, Inquirer Mindanao