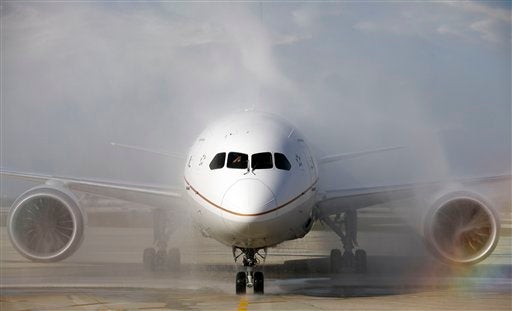 In this Nov. 4, 2012, file photo, a United Airlines 787 Dreamliner arrives at O’Hare international Airport in Chicago, from Houston, after making United’s inaugural 787 revenue flight. Airline passenger numbers are set to rise by over a quarter in the coming years to hit 3.6 billion in 2016, with China accounting for nearly one in four new travelers, the International Air Transport Association (IATA) said Thursday, Nov. 6, 2012. AP PHOTO/NAM Y. HUH

GENEVA—Airline passenger numbers are set to rise by over a quarter in the coming years to hit 3.6 billion in 2016, with China accounting for nearly one in four new travelers, the International Air Transport Association (IATA) announced Thursday.

The Geneva-based organization said that the 28.5-percent global increase over the next five years means that airlines will carry 831 million more people in 2016 than in 2011.

By contrast, the emerging economies of Asia-Pacific, Latin America and the Middle East will see the strongest passenger growth, the report showed, with routes within or connected to China accounting for 193 million of the 831 million new passengers by 2016.

By 2016, IATA continued, the Asia-Pacific region will represent 33 percent of global passengers, up from 29 percent in 2011 and ahead of North America and Europe, forecast to represent 21 percent.

But the IATA chief warned governments “to recognize aviation’s value with policies that do not stifle innovation, tax regimes that do not punish success and investments to enable infrastructure to keep up with growth.”