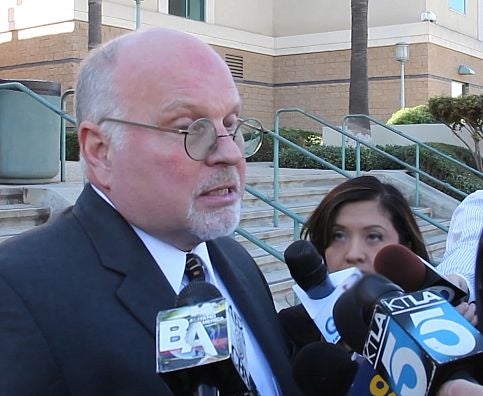 RIVERSIDE, California—A 23-year-old Filipino-American and two other men pleaded not guilty to terror-related charges yesterday (Thursday in Manila) at their arraignment in federal court here.

Ralph de Leon was escorted by US marshals to the courtroom in shackles and wearing an orange jail uniform. He was seated with the other defendants, Arifeen Gojali, 21, and Miguel Santana Vidriales, 23, on one side of the courtroom.

De Leon’s father, stepmother, sister and other relatives sat on the opposite side with representatives from the Philippine consulate and members of the media.

De Leon’s father declined to be interviewed, but asked about his son’s “not guilty” plea, he told the Philippine Daily Inquirer, “Of course he is innocent.”

“I find him to be a very intelligent, nice young man,” said De Leon’s lawyer, Randy Driggs. “He has a nice family which is very supportive of him.”

De Leon of Ontario, Gojali of Riverside and Vidriales of Upland were indicted for allegedly plotting to kill US soldiers overseas and providing material support to terrorists. If convicted, they each face up to 15 years in prison.

They were alleged to have conspired with American Sohiel Omar Kabir, 34, of Pomona to kill Americans and bomb US military bases overseas.

Kabir, who was arrested in Afghanistan, has been brought back to the United States and made his court appearance on Tuesday, his lawyer, deputy federal public defender Jeffrey Aaron, told reporters. Held without bail, Kabir has a court appearance on Dec. 11.

Federal Bureau of Investigation agents arrested De Leon, Vidriales and Gojali in the US during a traffic stop two days before they were to board a plane for Istanbul on their way to Afghanistan.

Driggs told reporters he was waiting to get all the evidence against his client, a process that could “take a few weeks at best.”

“It’s going to take a long time (because) of the large amounts of discovery,” Driggs said. “I will make the appropriate legal motions after we look at the  evidence.”

“There are recordings; I don’t know how many there are. In the normal course, there will be requests and hopefully they will be provided all of the work that this confidential source had done. They’ve indicated that (it was) four and a half years of work,” he said.

Federal Magistrate Judge Oswald Parada set the start of the jury trial on Jan. 22. The case was assigned to Judge Virginia Phillips.

Read Next
7 presumed dead in ship collision off Dutch coast
EDITORS' PICK
Get 80% OFF Ignite 2020 Cyber Tickets starting 28 September
Despite toll, never too late to fight pandemic—WHO chief
Feud is over: Velasco next Speaker on Oct. 14
Smart poised to turn PH into ‘Smart 5G country’ with nationwide rollout
House to probe Facebook takedown of gov’t accounts
Water remains our saving grace right now
MOST READ
Velasco to take over as Speaker on Oct. 14
Gun attack in PMA: Air Force man killed, 2 others wounded
SAP is over: P6B allocated under Bayanihan 2 law for DSWD to fund livelihood aid – DBM
Duterte meets with Cayetano, Velasco amid speakership issue
Don't miss out on the latest news and information.