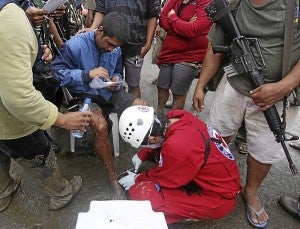 This picture taken on December 5, 2012 shows a Red Cross volunteer (C, bottom) giving first aid to a seated rescued soldier (L) in the aftermath of Typhoon Bopha in New Bataan, Compostela Valley in the southern Philippines on December 5, 2012. At least 325 people were killed and hundreds remain missing in the Philippines following the deadliest typhoon to hit the country this year, the civil defence chief said on December 6. AFP PHOTO / Karlos Manlupig

MANILA, Philippines – The United States has offered $100,000 for disaster relief efforts in the Philippines in the wake of the destruction brought by Typhoon Pablo (international name Bopha).

In a statement, the US embassy in Manila said the grant, made available through the United States Agency for International Development (USAID), would be given to the non-profit organization Catholic Relief Services.

The statement quoted Chargé d’ Affaires Brian Goldbeck as saying that teams from the USAID’s Office of Foreign Disaster Assistance (OFDA) and USAID Philippines would conduct humanitarian assessments in typhoon-affected areas, including Davao and Cagayan de Oro in Mindanao, Negros Oriental Province in the Visayas, and Palawan Province in Luzon in the coming days to determine where the assistance was most needed.

Latest reports had noted that over 200,000 people were affected after the strongest storm to hit the country battered Visayas and Mindanao Tuesday. At least 325 people were reported dead, while hundreds were missing and injured.

In an earlier statement, Goldbeck offered the US’ condolences for the destruction brought by the typhoon, and expressed the government’s support for local officials’ efforts to prevent and reduce its impacts.

The embassy noted that the US had been a key partner of the Philippines in providing immediate humanitarian response during natural calamities.

“In 2012, USAID/OFDA provided over US$4.1 million for disaster risk reduction activities in the Philippines,” it said.

Meanwhile, Japan on Thursday also vowed to support Philippine victims for the flood, saying that it would extend any necessary assistance.

Canada and the European Union had earlier sent the Philippines their messages of support and pledges of aid .