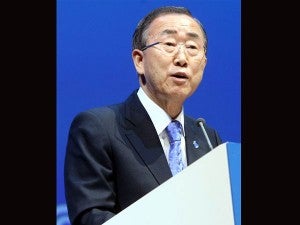 UN Secretary-General Ban Ki-moon addresses the opening of the high-level segment of the annual UN climate talks involving environment ministers and climate officials from nearly 200 countries, in Doha, Qatar, Tuesday, Dec. 4, 2012. A World Bank report said on Wednesday Global warming will have dire consequences for the Middle East and North Africa, with even hotter and drier conditions devastating everything from agriculture to tourism. AP PHOTO/OSAMA FAISAL

DOHA—Global warming will have dire consequences for the Middle East and North Africa, with even hotter and drier conditions devastating everything from agriculture to tourism, a World Bank report said on Wednesday.

On current trends, average temperatures in Arab countries are likely to rise by as much as three degrees Celsius (5.4 Fahrenheit) by 2050 – and double that for night-time temperatures, said the report released at UN climate talks in Doha.

Rainfall in the region with the world’s lowest endowment of fresh water is projected to become even more unreliable, and flash floods more frequent.

“The climate of Arab countries will experience unprecedented extremes,” warned the report.

“Temperatures will continue to reach record highs, and in many places there will be less rainfall. Water availability will be reduced, and with a growing population the already water-scarce region may not have sufficient supplies to irrigate crops, support industry, and provide drinking water.

“Climate change will not only challenge the status quo: it will threaten the basic pillars of development.”

Negotiators from nearly 200 countries are gathered in the Qatari capital to thrash out a deal on reducing Earth-warming greenhouse gas emissions and provide funding to help developing nations, many in this region, deal with a changing climate.

The United Nations is targeting a global warming limit of two degrees Celsius from industrial age levels, but several reports have recently warned that Earth is heading for double this on current emissions trends.

The World Bank said climate change has, or soon will, affect most of the 340 million people in the Arab region – but the 100 million poorest, with fewer resources to adapt, will feel it most.

It will affect livelihoods – causing a cumulative drop in household incomes of about seven percent in Syria and Tunisia and 24 percent in Yemen, said the report.

All but six Arab countries already suffer from water scarcity, which is defined as less than 1,000 cubic meters (264,200 gallons) of water per person per year.

Climate change is expected to reduce water runoff by another 10 percent by 2050, while demand will grow by 60 percent.

On top of water scarcity and even more scorching temperatures, farmers will also have to contend with saline intrusion from the sea, new pests and a drop in soil fertility, said the report.

The current rate of increase in agricultural production is likely to slow over the next few decades, and may start to decline after about 2050.

“This is alarming because almost half of the Arab region’s population lives in rural areas, and 40 percent of employment is derived from agriculture.”

Contributing about $50 billion dollars (38 billion euros) to the Arab region’s purse today, about three percent of its gross domestic product and six percent of employment, the sector is likely to be hard hit once tourists start opting for milder climes.

“Snowfall in Lebanon (for skiing), Red Sea coral reefs, and many ancient monuments across the region are threatened by climate change and severe weather,” said the World Bank.

“As the climate becomes ever more extreme, so will its impacts on people’s livelihoods and well-being,” said Inger Andersen, World Bank vice president for the Middle East and North Africa region.

“The time to take actions at both the national and regional level in order to increase climate resilience is now.”