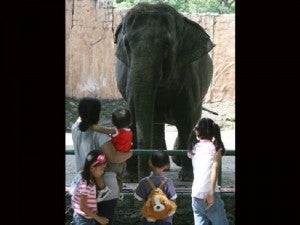 Visitors gaze at Mali, an elephant in Manila Zoo, who was featured during the Araw ng Maynila festivities in June 2008. INQUIRER FILE PHOTO

MANILA, Philippines – Malacañang has expressed concern over the sorry condition of animals in Manila Zoo a day after it generated global buzz on Twitter.

“We share the concern expressed by concerned citizens over the condition in which animals are kept in the Manila Zoo,” Presidential Spokesman Edwin Lacierda Thursday.

The Palace has alerted the Bureau of Animal Industry, which regulates zoos in the Philippines, Lacierda said.

“As a response, the BAI, through the Committee on Animal Welfare, said that it continuously engages in a comprehensive discussion with the animal advocates, particularly on the condition of Mali the elephant and other animals in the zoo,” he said.

On Tuesday, the global Twitter community was abuzz with Manila Zoo talk and netizens bared the plight of animals in Asia’s oldest zoo.

“Manila Zoo is trending worldwide because the animals there are suffering. Please, let’s all do something about it,” tweets guitaristaah as she urges the web community to sign a petition of the People for the Ethical Treatment of Animals deploring the sorry condition of animals in “cramped, barren cages that can’t compare to their natural habitats.”

One netizen shared a blog link showing photos of malnourished donkeys, and a rabbit and ostrich with untreated wounds.

But Manila Zoo’s director, Deng Manimbo, said the blog’s photos were at least three years old and that the animals were now well fed and cared for.

“The animals are in good condition,” he said, but added that he was happy the extra attention may lead to more people wanting to help the zoo.

Lacierda said the government’s animal welfare agency is taking steps to improve the living condition of the animals.

“They made a plan of action to uphold the welfare of the animals that should be led by zoo officials,” he said, as he noted that animals in the Philippines are protected under the Animal Welfare Act of 1998.

“It is noteworthy that concerned citizens have expressed the willingness to assist in any way they can, to help the Manila Zoo improve its facilities and raise its standards,” he said.

“We are encouraged by this demonstration of public spirit on the part of our fellow citizens. It is a positive sign that the citizenry wants to be part of the solution and not just point out a problem,” Lacierda said.