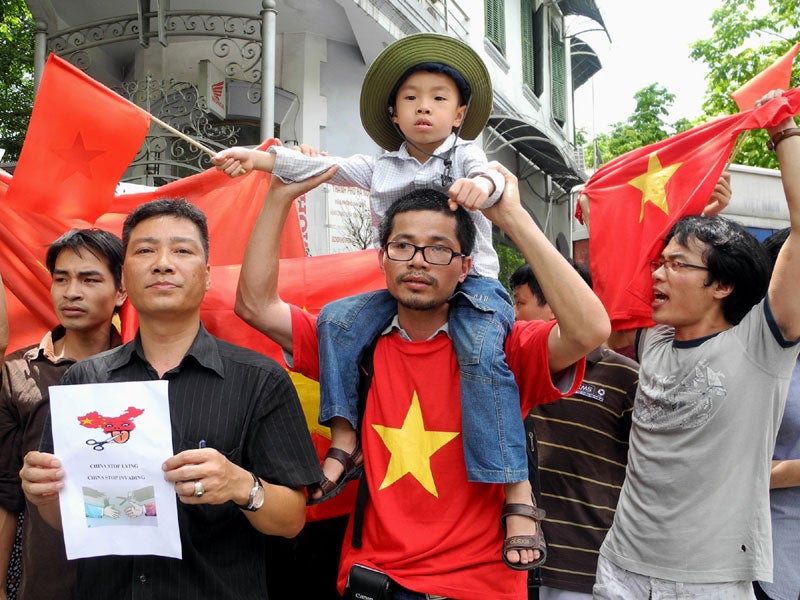 About 100 Vietnamese stage a protest near the Chinese Embassy in Hanoi, Vietnam on Sunday. Vietnamese protesters marched through the capital's streets for a fourth straight week, calling for China to stop entering Vietnamese waters in the West Philippine Sea as tensions between the neighbors continue to flare. AP

A Chinese navy ship chased the fishermen before dispatching a speedboat with 10 soldiers armed with automatic rifles and batons, a border official in Vietnam’s central Quang Ngai province said on condition of anonymity, citing policy. The soldiers boarded the fishing boat near the contested Paracel Islands.

The soldiers punched and kicked the Vietnamese captain and threatened nine other crew members in the July 5 incident, he said, adding the captain was not injured.

The Vietnamese official said the Chinese soldiers confiscated one ton of fish from the boat and drove it from the area. The fishermen continued working before coming to shore and reporting the incident to authorities Wednesday, he said.

The incident is the latest flare-up in an ongoing maritime spat between the communist neighbors that has increased regional tensions after both countries recently announced they had conducted live-fire naval drills in the West Philippine Sea, also known as South China Sea.

Twice since May, Vietnam has accused China of interfering in its oil and gas exploration efforts. China instead says Vietnam endangered its fishermen.

Vietnam and China both claim the resource-rich Paracels. China has stationed troops there since driving out South Vietnamese soldiers in 1974, one year before the end of the Vietnam War.

The recent blowup has sparked rare demonstrations near the Chinese Embassy in Hanoi for the past six weekends despite the detention of protesters and journalists covering the event Sunday.

Last month, a Vietnamese envoy traveled to Beijing for talks with Chinese officials where they agreed to negotiate a peaceful resolution.

China also has been sparring with the Philippines over the nearby Spratly Islands.