Filipino confirmed dead, another missing in US oil rig fire—officials 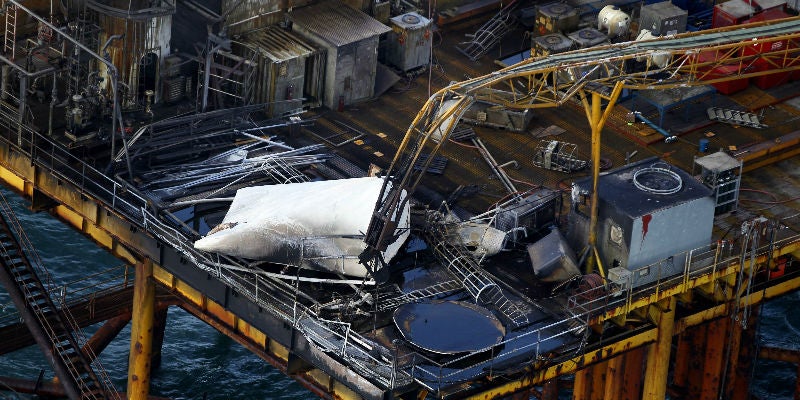 This aerial photograph shows damage from an explosion and fire on an oil rig in the Gulf of Mexico, about 25 miles southeast of Grand Isle, Louisiana on Friday. AP

MANILA, Philippines—The body recovered in the waters near an oil platform that caught fire in the Gulf of Mexico belonged to one of two missing Filipino workers, the Philippine Embassy in Washington, D.C., confirmed Sunday.

“We regret to announce that the body that was recovered near the accident scene a few hours ago belongs to one of our two missing kababayans,” Ambassador Jose Cuisia, Jr. said as he expressed his condolences to the family of the victim.

The remains of the Filipino were found Saturday night by divers hired by Black Elk Energy, US Coast Guard spokesman Carlos Vega said. Vega said the Coast Guard would be turning over the remains to local authorities.

Houston-based Black Elk Energy is the owner of the oil platform.

Oilfield contractor Grand Isle Shipyard Inc., employer of the two Filipinos, identified the recovered body as that of one of the two missing workers, Cuisia said. The embassy declined to release names and expressed its condolences to the family of the dead worker.

John Hoffman, the president and CEO of Black Elk Energy, said the body was found close to the leg of the platform, near where the explosion occurred, in about 30 feet of water.

According to WWL-TV in New Orleans, GIS CEO Mark Pregeant had released a statement that said that the company had notified the family of the victims. The statement, however, did not give their names.

“We saw no signs of life. We have suspended the search… pending further development,” Vega said.

But Black Elk Energy has vowed to continue searching for a second missing Filipino worker.

“Divers will continue to search for the second missing worker,” Hoffman wrote in an e-mail. “Our thoughts and prayers are with the families.”

Cuisia said, “We continue to hope and pray that our other kababayan (countryman) is still alive and would be recovered soon.”

At least nine Filipino workers were injured in the blaze and four of them remained at Baton Rouge General Medical Center in Louisiana where they were being treated for serious burns, he said.

“Doctors there said two of the burn victims are in critical condition while the other two are in serious condition,” Cuisia said.

Three other Filipinos were working on the oil platform at the time of the incident but Cuisia said the embassy could not immediately confirm whether they were among the nine Filipino workers that the US Coast Guard said were hurt in the incident.

Grand Isle Shipyard employed 14 of the 22 workers on the platform at the time of the explosion, WWL-TV reported. A man who answered the phone at the company’s Galliano, Louisiana, office on Saturday said no one was available to comment.

Philippine Embassy Welfare Officer Saul de Vries will visit the hospital to check on the condition of the injured Filipinos and find out “what assistance the Philippine government could extend to them or their families in the Philippines,” said Cuisia.

Information reaching the embassy indicated the Filipinos are all employees of Grand Isle Shipyard Inc., which provides manpower to Black Elk Energy.

They are among an estimated 162 welders, fitters, scaffolders and riggers hired in the Philippines, through Grand Isle’s US recruitment agency, D&R Resources and its Manila-based counterpart, Industrial Personnel and Management Services, to work in offshore platforms in the Gulf of Mexico.

Consul General Leo Herrera-Lim said the Philippine Consulate General in Chicago had earlier been coordinating with US Coast Guard authorities and continued to monitor the situation. He said Deputy Consul General Orontes Castro was also in touch with Grand Isle and with Black Elk Energy.

US authorities have said the blaze erupted Friday morning while workers were using a torch to cut an oil line on the platform.

Pregeant’s statement, however, said the cause of the fire and explosion was unknown and that “initial reports that a welding torch was being used at the time of the incident or that an incorrect line was cut are completely inaccurate.”

Separate from the explosion, Grand Isle Shipyard is facing a lawsuit by a group of former workers from the Philippines who claim they were confined in cramped living quarters and forced to work long hours for substandard pay. The lawsuit was filed in late 2011 in a Louisiana federal court and is pending. Lawyers for the company have said the workers’ claims are false and should be dismissed.

Meanwhile, company officials said no oil was leaking from the charred platform, a relief for Gulf Coast residents still weary two years after the BP oil spill illustrated the risk that offshore drilling poses to the region’s ecosystem and economy.

Black Elk released a statement saying that the platform hasn’t been operating since August.

Black Elk Energy is an independent oil and gas company. The company’s website says it holds interests in properties in Texas and Louisiana waters, including 854 wells on 155 platforms. With a report from Associated Press in New Orleans