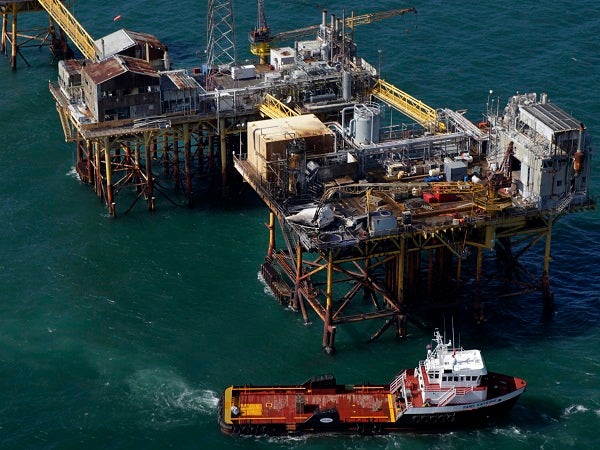 In this aerial photograph, a supply vessel moves near an oil rig damaged by an explosion and fire, Friday in the Gulf of Mexico about 25 miles southeast of Grand Isle, Louisiana. AP

MANILA, Philippines—At least nine Filipinos were reported injured while two others were missing after a fire broke out on an oil platform in the Gulf of Mexico, the Philippine Embassy in Washington DC said on Saturday (Sunday in Manila).

Four of the injured Filipinos were severely burned in the blaze, which started Friday while workers were using a torch to cut an oil line about 25 miles off Grand Isle in Louisiana,  Ambassador Jose Cuisia, Jr. said in a statement.

Officials at Baton Rouge General Medical Center said Saturday that two Filipinos remained in critical condition, while two other compatriots remained in serious condition. The four, being treated in a burn unit, are employees of oilfield contractor Grand Isle Shipyard.

The hospital said it and Grand Isle Shipyard are trying to reach the men’s families in the Philippines.

“The Philippine Overseas Labor Office here at the embassy has been informed that the medical needs of the workers are being taken care of. The Philippine Consulate General in Chicago has also been informed about the incident and is now monitoring developments there,” Cuisia said.

The Philippine Embassy earlier reported that 13 Filipinos were injured.

The US Coast Guard called off its search for the two missing Filipino workers at about 5:25 p.m. CST Saturday. Helicopters had been searching for the two from the air, while a cutter searched the sea.

The production platform owned by Houston-based Black Elk Energy is on the western side of the Mississippi River delta. The Coast Guard said 22 people were on the platform at the time of the fire, 14 of them are employees for contractor Grand Isle Shipyard.

It’s unclear whether the missing men also worked for Grand Isle Shipyard. A man who answered the phone at the company’s Galliano, Louisiana office on Saturday said no one was available to comment.

Coast Guard Captain Ed Cubanski said the platform appeared to be structurally sound. He said only about 28 gallons (106 liters) of oil were in the broken line on the platform.

David Smith, a spokesman for the Interior Department’s Bureau of Safety and Environmental Enforcement in Washington, said an environmental enforcement team was dispatched from a Gulf Coast base by helicopter soon after the Coast Guard was notified of the emergency. Smith said the team would scan for any evidence of oil spilling and investigate the cause of the explosion.

Black Elk is an independent oil and gas company. The company’s website says it holds interests in properties in Texas and Louisiana waters, including 854 wells on 155 platforms.

John Hoffman, Black Elk’s president and CEO, said in an email early Saturday morning that he was leaving Houston for Louisiana to assist in the investigation and help the families of the missing and injured workers.

“My entire focus is the families and workers. Nothing else matters at this point,” he wrote. With a report from Associated Press in New Orleans