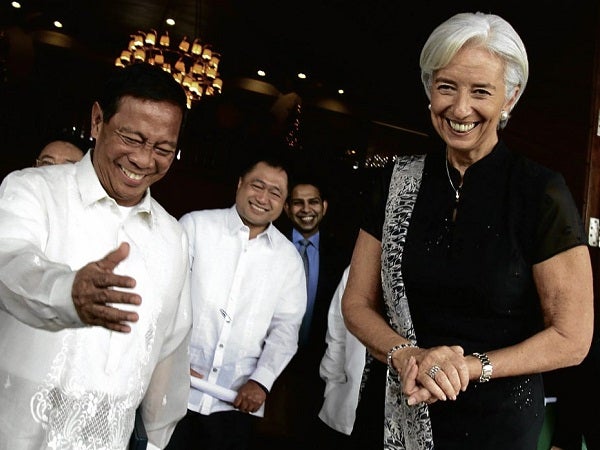 MANILA, Philippines—The Philippines is the only country in the world for which the International Monetary Fund has upgraded its economic growth forecast for 2012, according to visiting IMF managing director Christine Lagarde.

Compared with the once-powerhouse economies of Europe and the United States, which are now struggling, the Philippines is on the road to maintaining an average growth rate of 5 percent next year, Lagarde told a press briefing in Malacañang on Friday.

“I congratulated the Filipino authorities for their excellent economic stewardship during difficult times. In the last decade, the Philippines managed to have an average growth of about 5 percent,” said Lagarde, who met earlier with Finance Secretary Cesar Purisima, Budget Secretary Florencio Abad and Deputy Governor Diwa Guinigundo of the Bangko Sentral ng Pilipinas.

“And you will be interested to know that this year, 2012, at a very difficult time because of the financial crisis in other parts of the world, the Philippines is probably the only country in which we have increased the growth forecast as opposed to other places in the world where we actually decreased our forecast,” said Lagarde, the first woman to head the IMF and who was recently named by Forbes magazine as the 8th most powerful woman in the world.

The Aquino administration has set a growth target of between 5 and 6 percent this year, 6 and 7 percent in 2013, and at least 7 percent in the succeeding years.

Lagarde said she knew that growth in 2012 would be “way in excess of five percent” even as the IMF looked forward to the country’s growth rate for 2013 being in the range of 5 percent as well.

Lagarde is the second important international leader to make optimistic projections about the Philippines’ economic future. Last week, visiting Canadian Prime Minister Stephen Harper’s made the bullish prediction to President Aquino that the Philippines was “an emerging Asian tiger.”

Australia earlier made a similar observation, with the Australian business establishment led by the Asia Society Australia telling the President during the latter’s state visit there last month that the Philippines was now “the fastest-growing economy in Asia.”

Lagarde described as “excellent” the manner by which the Philippine economy is being managed, citing the country’s respectable growth, benign inflation and stable financial sector in the wake of a crisis gripping many industrialized countries.

“Thanks to these good policies and reforms, the Philippines has become a vibrant emerging market that is approaching investment-grade status,” she said.

Lagarde said there was a good mix of fiscal and monetary policies in the Philippines.

This is partly the reason why the country has managed to grow by a decent pace so far this year despite global economic problems, she said.

“Fiscal policy” refers to the ways by which the government, through the finance and budget departments, collects and spends revenues, and manages its overall finances. “Monetary policy” refers to the manner by which the central bank manages liquidity within the economy to help ensure inflation—the increase in consumer prices—stay within manageable levels and financial markets remain stable.

In the first semester, the Philippine economy grew by 6.1 percent from a year ago, while inflation averaged 3.2 percent in the first 10 months, well within the 3- to 5-percent target for the year.

The Philippine growth performance is considered very favorable, especially in the light of the contraction suffered by advanced economies, including those in the Euro zone and Japan.

In addition, the government’s debt-to-GDP ratio—or the proportion of its outstanding debts to the country’s gross domestic product—has fallen over the years from about 74 percent in the mid-2000s to just about 50 percent today.

The 50-percent ratio for the Philippines is way manageable compared with the average of 90 percent for the euro zone and the over 100 percent for some European countries confronting a debt crisis.

Moreover, the country’s financial sector remains stable, with major banks in the country continuing to post double-digit growth in profits while the euro zone suffers from a crisis in its banking sector.

She said emerging Asian countries like the Philippines play a significant role in driving growth of the global economy at this difficult time when industrialized countries are confronted with economic problems.

Lagarde, however, said that despite the favorable economic growth story, the country has its share of problems.

“It is no secret,” she said, that about 42 percent of the Philippine population was living on less than $2 a day.

One advice she gave was for the government to continue with, if not strengthen, programs aimed at addressing inequality.

She said the government is in the right direction in its antipoverty programs, including the conditional cash transfer (CCT) program which gives grants monthly subsidies to selected poorest families.

“Certainly looking ahead, we share the government’s view that growth must benefit the broader section of the population. We certainly have research that demonstrate that inclusive growth is more sustainable, and it is really to the credit of this government to make sure that growth is as inclusive as possible and that inequalities can be reduced,” Lagarde said.

From lender to creditor

Lagarde talked at length on the changed relationship between the country and the IMF, following the Philippines’ exit from the fund’s lending program.

“We are looking forward to continuing our partnership in a different setting and status, if I may say so, than in the past, given that the Philippines is a net creditor of the IMF, and has actually participated in the bilateral loans that have been put in place this year in order to contribute to the increased resources of the IMF to deal with the consequences of the financial crisis, including for the crisis (fund) bystanders,” she said.

“So the IMF is very, very pleased for the historical partnership that we’ve had, but particularly pleased that it has now taken the form of the creditor relationship,” she said.

The Philippines earlier this year pledged a $1-billion loan to the IMF as its contribution to the agency’s rescue fund for crisis-stricken countries, mostly in the euro zone.

The Philippines, which enjoys $82 billion in foreign exchange reserves, has shifted from being a borrower-member to a creditor-member of the IMF after having fully paid all its obligations to the multilateral institution in the late 2000s.

Lagarde said the IMF currently has a little over $1 trillion in funds that it can tap to lend to countries in need. So far the amount is deemed sufficient, although she said the IMF cannot totally rule out the possibility to ask for additional contributions from member-countries, like the Philippines, in the future.

Purisima, speaking ahead of Lagarde, thanked her for including the country in her three-nation Asian swing, which also includes Malaysia and Cambodia.

He noted that while the Philippines has changed from being a major customer to a small creditor of the IMF, the agency continues to be a partner in building institutions.

He said that in the Bureau of Internal Revenue, for instance, an IMF adviser was helping the agency develop its information systems “to make sure that we become more efficient in collecting taxes.”

Purisima said the Philippines was looking forward to working with the IMF in building institutions in Mindanao once a peace agreement is signed with Muslim rebels “within the next few months.”

Lagarde had been scheduled to pay a courtesy call on Mr. Aquino at 10 a.m. in Malacañang, but had to be diverted at the last minute to the Coconut Palace where Vice President Jejomar Binay received her instead.

“The President is not feeling well. She will be received by the Vice President,” said Lacierda, who did not elaborate.

After meeting Binay, however, Lagarde still went to Malacañang for a scheduled briefing with the media.

The President is said to be preparing for a trip to Cambodia for the 21st leaders’ summit of the Association of Southeast Asian Nations. He is scheduled to leave for Phnom Penh at 7 p.m. Saturday.