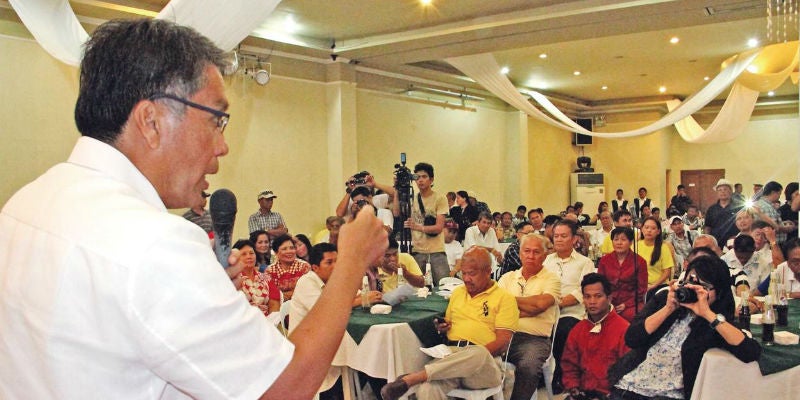 BLOOD MONEY Interior Secretary Manuel Roxas on Tuesday assures victims of a multibillion-peso pyramid scam in Pagadian City that the government will run after the perpetrators of the scheme. RICHEL V. UMEL/ INQUIRER MINDANAO

A company managed by a former janitor and driver, and founded just early this year, has duped at least 15,000 people in Mindanao and the Visayas of P12 billion in a pyramid scam, an official of the National Bureau of Investigation said Tuesday.

“Some of the victims committed suicide and others have become violent and sick when they learned their hard-earned money was gone,” said Virgilio Mendez, NBI deputy director for regional operations services, who was investigating the scam.

He said the number of “complainants from across the country is piling up.”

The first investors of the company were low-income people but professionals and retired employees followed because of the promise of a high return on investment, Mendez said. 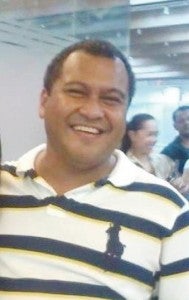 “The first clients of Aman Futures were market vendors in Pagadian City who invested P1,000 with a 70-percent return after one week,” he said.

The NBI deputy director said Luna, who managed the multibillion scam, “is a former driver and utility person for a company located near the Pagadian City public market.”

Luna’s boss, Amalilio, is a 32-year-old Malaysian, whose Malaysian name is Mohammad Suffian Saaid. His wife is identified as Abigail Pendulas, and they have two children, ages 2 and 1.

Luna and Amalilio and their families are now in hiding, according to Mendez.

“He visits his offices in Mindanao and Visayas using private planes and luxury cars,” Mendez said.

He said Aman Futures was able to lure investors by offering a 30-percent to 40-percent return on investment within eight days, and a 50-percent to 80-percent profit for 18 to 20 days.

“The amount of interest varies depending on the investment or money placements,” Mendez said.

He said the modus operandi of Aman Futures was to offer a return through a postdated check of the entire sum of the investment plus a profit up to 80 percent.

“Because of the huge interest, the number of investors of Aman Futures increased tremendously,” Mendez said.

Due to its success in Pagadian City, Aman Futures expanded its business to other cities and provinces like Lanao del Sur and Zamboanga in Mindanao and to Cebu City, he said.

With the huge increase in the number of investors, Aman Futures  raised its required minimum investment from P1,000 to  P200,000,” Mendez said.

“And in order to meet the new requirement, investors pooled their resources and others mortgaged lands and houses to comply with the requirement,” Mendez said.

He said investors started lining up at 2 in the morning although the office of Aman Futures Group had yet to open at 8 a.m.

No queues for VIPS

Every day, some 3,000 people were lining up at the office of Aman Futures in Pagadian City. “But VIPs were not required to fall in line and could deal directly with Luna,” Mendez said.

“The complainants said at the beginning that they thought they could realize their dreams to own cars and expensive things by making more investments in Aman Futures,” Mendez said.

He said the victims trusted Aman Futures largely because of endorsements from local officials.

“They trusted Aman Futures because even local government officials had openly endorsed it and admitted to have invested also,” Mendez explained.

Mendez said the NBI had received reports that government funds could have been used to invest in Aman Futures.

“We are currently investigating if government funds were used by local officials who invested in the scam,” Mendez said.

He declined to name the officials, but said charges would be filed against these officials should they be found to have used public funds.

Mendez said investors had started filing complaints in the NBI against Aman Futures in September for its failure to pay back their money.

At first, the victims could receive cash by just showing their official receipts. But later, investors were issued postdated checks with a 50-day maturity date in lieu of cash.

“But the checks issued by Aman Futures started to bounce and the account was eventually closed,” Mendez said.

Mendez said some victims had resorted to burning the houses of relatives of Aman Futures employees. “So far, two houses of Luna’s relatives were torched by victims who demanded they return their money,” he said.

Mendez said that complainants had been going to Keppel Building in the Cebu City Business Park office of Aman Futures, registered under another name, FRETZ and Sha Trading.