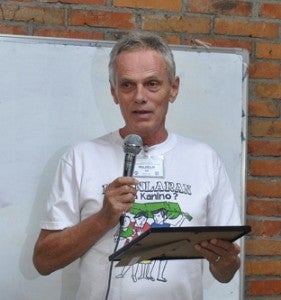 State Prosecutor Philip Tumala is expected within 60 days to issue a resolution determining whether the case was for murder, as Geertman’s partner Aurora Santiago had filed, or for robbery with homicide, as the police here had initially filed in Tumala’s office right after the July 3 killing of Geertman.

The police failed to present any of the four suspects during the preliminary investigation, records in Tumala’s office showed.

Two of the suspects were described in Santiago’s affidavit as police and military agents.

Santiago and political activists, who had mounted demonstrations outside the local offices of the Department of Justice here, maintained that Geertman, 67, was a victim of extrajudicial killing.

In his 40-year stay in the country, Geertman was involved in campaigns opposing mining and logging, and programs promoting education, agrarian reform, ancestral domain titling to indigenous peoples and disaster management.

“It was a premeditated murder masquerading as robbery with homicide,” said Edre Olalia, counsel for Santiago.

Santiago was scheduled to be married to Geertman this year until two gunmen entered Geertman’s office on July 3 at the L&S subdivision, shot him and took away the money he had just withdrawn from a bank in Angeles City.

The police obtained video footage of the suspects through close circuit television cameras at the village’s gate and a store.

Santiago and representatives of activists’ groups submitted a petition asking the Dutch parliament to call for an independent investigation of the killing.