China bares plan to be a naval power 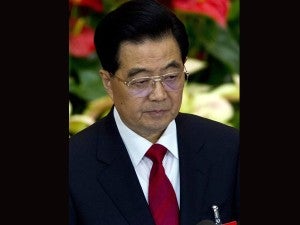 Chinese President and Communist Party general secretary Hu Jintao reads a work report during the opening session of 18th Communist Party Congress at the Great Hall of the People in Beijing, China, Thursday, November 8, 2012. Hu stressed its intention to become a “maritime power” in line with its economic clout. AP PHOTO/ALEXANDER F. YUAN

BEIJING—China on Thursday stressed its intention to become a “maritime power” in line with its economic clout, as newly reelected US President Barack Obama prepared to return to Asia amid regional anxiety at Beijing’s rise.

Obama is slated to attend a summit of East Asian leaders in Phnom Penh, Cambodia, this month, underscoring his commitment to the Asia-Pacific region.

Concerned about China’s rising power and assertive behavior, they have supported the Obama administration’s “pivot” to the region as the United States disentangles from the wars in Iraq and Afghanistan.

Obama’s reelection means he can sustain the strategic shift toward the Asia-Pacific region started during his first term.

The strategy will see 60 percent of US warships moving to the region by the end of the decade, a plan that Beijing sees as intended to contain a rising China.

Against a backdrop of simmering territorial disputes with its neighbors, President Hu Jintao indicated China would continue to assert its disputed claims to maritime territories as he addressed the opening of the Chinese Communist Party’s 18th National Congress on Thursday.

“We should enhance our capacity for exploiting marine resources, resolutely safeguard China’s maritime rights and interests, and build China into a maritime power,” Hu said in his speech to more than 2,200 delegates in Beijing.

His comments are likely to fuel alarm among China’s neighbors, some of whom have watched warily as Beijing builds up its military amid offshore disputes.

Beijing’s sovereignty row with Tokyo over Japanese-controlled islands in the East China Sea has chilled relations between the two Asian economic powers, while tensions with the Philippines and Vietnam have flared in the West Philippine Sea (South China Sea).

Japan urged China to use its sea power peacefully.

“It is not surprising to hear leaders in (China) speak about their intention to engage in maritime activities,” said a foreign ministry spokesperson in Tokyo.

“But those activities must be carried out in a peaceful manner based on international law,” the spokesperson added.

The Philippines deferred comment, preferring to see how the change of leadership in China after the party congress would go.

A spokesperson for President Aquino said the Philippines was hoping to have warmer relations with China after the leadership change in Beijing.

Chinese and Philippine ships faced off with each other at Panatag Shoal (Scarborough Shoal) in the West Philippine Sea from April to June in a territorial dispute that has drawn diplomatic responses from the United States, the United Nations and the European Union supporting Manila and urging peaceful resolution.

Hu said China was committed to a peaceful foreign policy but must continue a military buildup that had seen huge sums poured into developing fighting capacities.

Citing “interwoven problems affecting its survival,” he said China must build a “strong national defense and powerful armed forces that are commensurate with China’s international standing.”

Hu called for China in particular to step up the military’s technological abilities, saying its most important task was to be able to “win a local war in an information age.”

Military analysts say China’s armed forces are far weaker than those of the United States and will remain so for some time.

But there is concern in Asian countries over Beijing’s military intentions, worries likely to loom in the background of the East Asian leaders’ summit in Cambodia this month.

Michael Pillsbury, former head of policy planning for the US defense department, told Agence France-Presse he was surprised by Hu’s comments.

“China is entitled to a legitimate military modernization program but the US and the neighbors still cannot get a straight answer about how large Beijing’s new Navy will be,” he said.

“Now President Hu seems to be calling for a major buildup, but again he gives us no details,” he said.

The party congress meets every five years. This year’s gathering will end with confirmation of a new slate of party and national leaders for the next decade, widely expected to be headed by current Vice President Xi Jinping.

During his speech, Hu also warned that China would “never allow anyone or any force to separate Taiwan from the motherland by any means.”

Beijing still claims the independently governed island—separated from mainland China at the end of the Chinese civil war in 1949—and accuses the United States of interfering in the situation. AFP