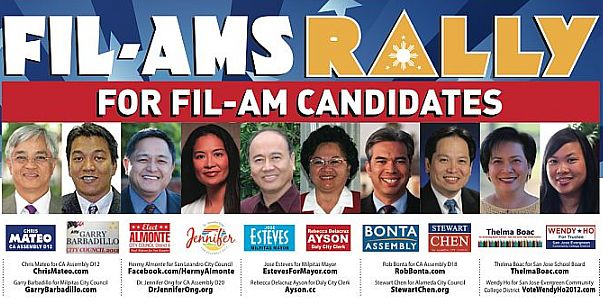 LOS ANGELES—At least 14 Filipino-Americans—one Republican and the rest Democrats—won national and state positions in California, Hawaii and Virginia in the Nov. 6 elections.

The only Republican in the group was Jose Esteves, 66, the incumbent mayor of Milpitas City in California, who defeated Rob Means.

Originally from Dagupan in Pangasinan province, Esteves won 72 percent of the vote. He migrated to the United States after earning engineering degrees from the University of the Philippines.

Alameda Vice Mayor Rob Bonta made history in California as the first Filipino-American to be elected to the State Assembly.

In Hawaii, all 11 Fil-Ams won seats in the state’s House of Representatives and the Senate.

In Virginia, Robert “Bobby” Scott, the first American of Filipino descent to serve in the US Congress, was elected to an 11th term, beating Republican Dean Longo. Scott led with 82 percent of the vote, with Longo receiving 17 percent, according to the State Board of Elections.

“It’s significant that there has never been a State Assembly member of Filipino-American descent in the 160+ years of California’s history, especially with Filipino-Americans now comprising the second largest Asian-American group in the state, and the fastest growing,” Bonta said in a statement on election eve.

“I’m honored for this opportunity to finally break through that barrier and serve not just the Fil-Am community, but all of the diverse communities in our district.”

He graduated with honors from Yale College with a degree in History. After studying at Oxford University in England, he returned to obtain his Juris Doctorate from Yale Law School.

It was one of the first statewide tests of California’s new open primary system, where the top two candidates move on to the general election, regardless of party. As a result, Bonta and Guillen, both Democrats, ran in a tight race. The district, newly drawn after the 2010 census, includes San Leandro, Alameda and Oakland.

Those who clinched seats in the State Senate were Donovan dela Cruz (22nd district), Will Espero (19th district) and Donna Mercado Kim (14th).

Another son of Pangasinan, former Hawaii Gov. Ben Cayetano, lost the mayoral race in Honolulu, according to the Honolulu Star-Advertiser. Cayetano’s father hailed from Urdaneta and was part of the first wave of Filipinos who worked in Hawaii’s sugar plantations in 1928.

In Ohio, Republican Marisha Agana lost her bid to represent the newly drawn 13th congressional district. She garnered only 28 percent of the votes, compared to her Democratic opponent Tim Ryan’s 72 percent.

The other two Fil-Ams running for the California State Assembly—Jennifer Ong and Chris Mateo, both Democrats—lost.

But Ong gave her opponent Bill Quirk a tough fight for the 20th district. Quirk won by a narrow margin, with 51.3 percent versus Ong’s 48.7 percent. Mateo, in the 12th district, got 38.6 percent of the votes, losing to Kristin Olsen, who scored 61.4 percent.

In Pennsylvania, William Sylianteng, who ran for the 151st legislative district, conceded to Todd Stephens. The Montgomery County Board of Elections unofficial results showed Stephens snagged 59.63 percent of the vote compared to Sylianteng’s 40.37 percent. With a report from Gabriel Cardinoza, Inquirer Northern Luzon