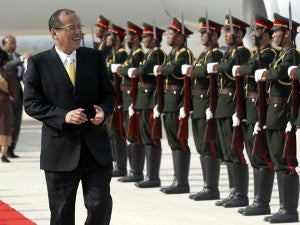 VIENTIANE, Laos—There is a need to manage new investments and assistance offers for Mindanao, which have accelerated following the signing of a preliminary Bangsamoro framework agreement, to ensure that the scramble for property and resources would not displace the people that the deal intends to help, according to President Aquino.

Japan, which played a pivotal role in the crafting of the agreement, is the latest country to offer assistance, and wants to be involved in fleshing out the agreement, Mr. Aquino said.

Mr. Aquino met with Japanese Prime Minister Yoshihiko Noda on the sidelines of the 9th Asia Europe Meeting in Vientiane Monday, and personally thanked him for his country’s role in the framework agreement.

In their meeting, Mr. Aquino and Noda also discussed their respective territorial disputes with China, and reaffirmed their desire for peaceful solutions. Both parties are also trying to de-escalate the situation, he said.

According to the President, the Japan meeting with Murad was a turning point in talks with the Moro secessionist group.

“I felt that was the turning point, where there was a direct meeting and leveling of expectations,” he told reporters.

He said Japan wants to continue participating in the International Contact Group and to help bring about peace in the region.

“[There is] their commitment to assisting with regards to really fleshing out the agreement and carrying out the steps necessary to achieving peace within what is now ARMM,” he said.

According to Mr. Aquino, it was not just Japan that has come up with offers to invest in the proposed Bangsamoro autonomous region. There is a lot of interest from many parties to participate in achieving the aims of the framework agreement, he said.

Earlier, Secretary Hermio Coloma of the Presidential Communications Operations Office said the European Union, Norway, and Switzerland were looking into increased investments in the Philippines, particularly in Mindanao.

“The impression that we get from all sources is a lot of these countries will be assisting us not just to the same degree that they did before but after the signing, maybe this would be in an accelerated and increased level,” Mr. Aquino said.

At the same time, he said, there is a need to manage investment offers for Mindanao, which have been pouring in following the signing of the framework agreement, to ensure that projects to be implemented would address the needs of those at the grassroots level.

“There’s already a call, for instance, to come up with what they call an investment coordinator by several quarters at home and from from foreign (parties),” he said. “There must be a guidance for the investment flows to minimize disruptions that are negative to the society that you’re trying to assist.”

Given the influx of offers, there is the risk that areas in Bangsamoro would be subject to a wild scramble from developers, and this could jack up property prices and displace the very people that the agreement is supposed to help, he said.

“There’s a potential that there will be many scrambling to develop whatever area. It would be too much like the Wild West. For instance, an area will be declared ready since it already has power and water. Everybody would try to get a piece of that property, and its value would rise…. Those whom they want to help might be displaced,” he said.

The framework agreement seeks to create the Bangsamoro in the place of the current Autonomous Region in Muslim Mindanao.