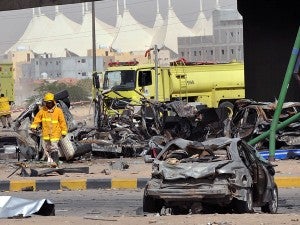 Saudi rescue workers are seen at the site where a truck transporting gas exploded on November 1, 2012 in Riyadh. AFP FILE PHOTO

DFA Assistant Secretary and spokesperson Raul Hernandez identified the Filipino driver as is Ruben Kebeng, based on the report given by Philippine Ambassador to Saudi Arabia Ezzedin Tago.

“The Philippine embassy in Riyadh is prepared to provide him with legal assistance to help him in his defense,” he added.

Hernandez said the embassy was waiting for the results of the investigation but said it was ready to provide a legal representative for the “distressed Filipino.”

He said that no other details were given about Kebeng except that he is 43 years old, in good condition and he had been working in Saudi Arabia for a year. He is also an Overseas Workers Welfare Administration (OWWA) member.

Reports from Saudi Arabia noted that the truck veered to a bridge pylon at a junction on Khurais Road in Riyadh at about 7:30 a.m. on November 1, causing a gas leak that spread out and then burst into flames, destroying nearby cars and a business.

Spokesperson Capt. Mohamed Hubail Hammadi had been quoted as saying that the tanker driver was surprised by a road accident on its route, causing it to crash into one of the pillars of the bridge. Saed al-Tweiri, the civil defense chief who confirmed that the fire had been brought under control, had blamed the tanker driver for the accident.

Hernandez, meanwhile, said that based on the report, Kebeng was part of a five-truck convoy passing through the road when the accident occurred. He said that the five drivers, all of them Filipinos, survived. He said that only Kebeng, who was under the custody of the criminal investigation office, was tagged as the suspect.

Hernandez added that Tago went to the criminal investigation office with a lawyer but they were refused consular access to the detained driver.

He said that the embassy did not want to speculate on the charges that would be given to the Filipino truck driver because of the sensitivity of the issue. He said they had also coordinated with Kebeng’s family.

Florentino Santiago, a Filipino worker in a tractor company in Riyadh, was among the 23 people killed in the explosion. Health ministry spokesperson Saad al-Qahtani said 135 others were injured, including 14 Filipinos.

Hernandez said that the embassy was coordinating with Santiago’s employer for the repatriation of his remains back to the Philippines.

“It’s a long process but the ambassador said last night they will try to expedite his repatriation,” Hernandez said.

He added that latest reports revealed that of the 14 Filipinos who were injured from the accident, six were still confined in hospitals while the others had already been discharged.

He said that of the confined Filipinos, one was in critical condition because of neck fracture and lower extremity paralysis.

“He should have been operated on last November 3 but he backed out the last minute because he was afraid he might get paralyzed,” he said. He said that embassy officials were still convincing the Filipino to undergo operation because of his condition.

Hernandez added that when Tago visited the hospitals, they were told by hospital authorities that the ministry of health will shoulder the treatment of those injured.