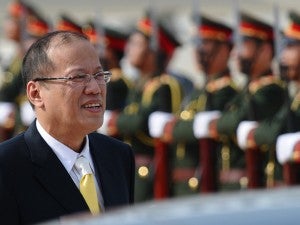 Philippines’ President Benigno Aquino (L) smiles as he is greeted by an honor guard upon his arrival at Wattay airport to attend the ninth Asia-Europe (ASEM 9) summit in Vientiane on November 4, 2012. AFP /HOANG DINH Nam

“I will bet you that my travels are much fewer than that of my predecessor,” Aquino said in his speech before over 200 Filipinos in Vientiane on Sunday.

The President has been criticized for his numerous trips but said it was because many meetings were being scheduled in the last quarter of the year.

“You know, we’ve just come from another trip. It seems we’ve been going out of the country frequently. I don’t know why they usually cram all of the meetings in the third and fourth quarter of the year,” he said.

Long debates were held, he said, before decisions were made whether or not to proceed with the trips.

And of course, his trips were not as many as those of Arroyo’s, Aquino added.

Aquino flew to Vientiane, Laos PDR Sunday for the 9th Asia-Europe Meeting (ASEM) Summit on November 5 to 6, the seventh country he has visited for official purposes this year. His Laos trip has an P8.9 million budget.

He said he had to attend the summit since he skipped the last one in 2010 in Belgium and quipped that he might be thrown out of the group if he missed another one. This is the first time he was attending the ASEM Summit.

The President also flew to Cambodia in April for the ASEAN summit; to the United Kingdom for trade and investment matters, and to the United States to meet US President Obama in June; to Russia for the Asia Pacific Economic Cooperation summit in September; and to New Zealand and Australia for state visits in October.

He flew to Brunei in September, but it was for the wedding of Sultan Hassanal Bolkiah’s daughter. The Office of the President did not spend for the Brunei trip.

He is set to visit Cambodia again for another ASEAN Summit later this month.

Aquino indicated that the numerous trips abroad have left him drained, but he said that meeting Filipinos working abroad restores his energy.

“They did not include rest in our job description, and that’s okay. It’s a good thing that even if we don’t get any rest, the tiredness and fatigue of the whole delegation is wiped away when we get to meet and mingle with fellow Filipinos,” he said.

He noted that meeting the Filipinos was the first thing he did upon arriving in Lao PDR for the ASEM, a move that he said was just logical.

Half of the Filipinos population in Lao PDR turned up for the meeting with Mr. Aquino at the Mekong restaurant Sunday, prompting Mr. Aquino to joke that his rivals in the elections would need to work double time.

Some of the Filipinos traveled long distances to the Laotian capital to see the President, including engineers and office workers from the Phu Bia Mining who journeyed five hours to Vientiane from their work site in the mountains of Lao.

Many of the Filipinos, garbed in Filipiniana or semi-formal attire, came hours early for the event. Children from the Filipino community performed a traditional Lao dance, while a band regaled the President, as well as the cabinet officials in attendance, with OPM hits.

During his speech, Aquino also commiserated with the overseas Filipinos over their usual sacrifice of spending the Christmas holidays away from loved ones and missing the gaiety and festiveness of the Filipino Christmas celebration.

He noted that he had spent more than seven Christmases with his detained father in Fort Bonicafio when he was young, and two yuletide holidays in Boston when his family was exiled and didn’t know if they could return to the country.

He also waxed rhapsodic about the Filipino delicacy “kutsinta” describing how he longed for it so much when his family was in Boston.

He recalled how a spouse of a doctor always made kutsinta for Christmas, although sans its usual partner of grated coconut. Since the cook was making kutsinta for the whole Filipino community, each person would only get two pieces of the treat.

Aquino said he would savor every bite of it since he did not know then when he would  come back to the Philippines.

So when he finally returned to the country, he made it a point to have kutsinta, and to eat three pieces each time.

“So I’ve tried all kinds of kutsinta in the Philippines. They have many colors. The psychedelic colors are now gone. Normally, it’s only one color now,” he said, to the amusement of the Filipinos present.