Philippines to get 5 French patrol boats 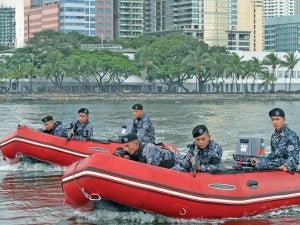 Rear Admiral Luis Tuason, the chief of the poorly equipped coastguard, said one 82-meter (271-foot) ship and four 24-meter (79-foot) patrol craft would be delivered by 2014.

Tuason cited the need for such ships to patrol the rough waters of the South China Sea, which Manila calls the West Philippine Sea.

“When we patrol the West Philippine Sea, we encounter huge waves, turbulent waters so it will be better if we will use bigger ships,” Tuason said in a statement.

Coastguard spokesman Lieutenant Commander Armand Balilo said the larger ship was a “heavy endurance vessel that can be deployed even in bad weather.”

This is the first such ship to be acquired by the coastguard, he added.

The Philippines and China began a stand-off in April over the Scarborough Shoal, a group of islets in the South China Sea.

China claims the shoal as well as nearly all of the South China Sea, even waters close to the coasts of neighboring countries. The Philippines says the shoal is well within its 200-nautical-mile exclusive economic zone.

Balilo denied that the new French ships were being acquired due to the territorial dispute and said the coastguard, which currently has only nine operating ships, needed new vessels to perform their duties.

He said the new vessels would be deployed throughout the archipelago and not concentrate just on the disputed areas.