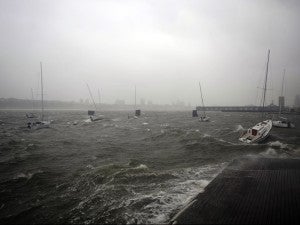 Sailboats rock in choppy water at a dock along the Hudson River Greenway during a storm, Monday, Oct. 29, 2012, in New York. Hurricane Sandy continued on its path Monday, forcing the shutdown of mass transit, schools and financial markets, sending coastal residents fleeing for higher ground, and threatening a dangerous mix of high winds and soaking rain. AP/Jeffrey Furticella

MANILA, Philippines—The chairperson of the Senate committee on climate change is amazed at the sense of preparedness and political will of New York’s local officials as Hurricane Sandy hit the US east coast.

“Their sense of preparedness is amazing and the political will of their leaders like Mayor Bloomberg is laudable considering he closed down the subways, forcibly evacuated residents as he did in Hurricane Irene,” Senator Loren Legarda said when asked if there was anything the Philippines could learn from the US response to the “Frankenstorm.”

“Even President Obama has been on national TV warning people to take it seriously,” Legarda told the Inquirer.—Norman Bordadora

Read Next
Hell, yes, four more years!
EDITORS' PICK
A laptop that maximizes your WiFi so you can maximize your productivity
Why Tagle is a leading papal contender
In Borongan, nuns play hoops (not mahjong)
Powered by style, innovation and passion
House energy committee chair Arroyo bats for cheap electricity
KWF has no power to ban, censor written works – Lagman
MOST READ
Why Tagle is a leading papal contender
Zubiri on SRA mess: Shameful, disgusting
Gilas gets solid core with Clarkson, Sotto planing in
Arjo Atayde reveals proposal to Maine Mendoza was ‘more than a year’ in the making
Don't miss out on the latest news and information.