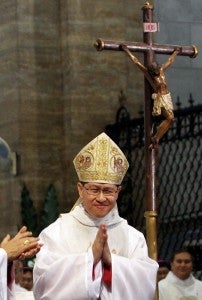 Lingayen-Dagupan Archbishop Socrates Villegas said he and other Filipino prelates—Archbishop Jose Palma and Archbishop Romulo Valles—waited outside the Vatican synod hall after hearing the news that Manila Archbishop Luis Antonio Tagle had been named cardinal.

“When I hugged him, he cried on my shoulders. Tears of joy but also tears of fear! Every grace is also a responsibility, he told me later. We pray with joy now. Let us pray for Cardinal Tagle on the months and years ahead. Rejoice dear Philippines! One of our sons is now a cardinal!” Villegas said in a statement released in Manila.

Clerics and lay leaders echoed the same joy and fear that Villegas expressed following the surprise announcement by Pope Benedict XVI that the 55-year-old Tagle would be elevated to cardinal at the consistory on Nov. 24 in the Vatican.

Tagle is scheduled to return to Manila on  Nov. 1. He will celebrate Mass on Nov. 3 in Paco, Manila, to launch the “Year of Faith” in his archdiocese.

“We are like John the Baptist crying out in the wilderness,” said Tagle in an interview with Vatican Radio yesterday, a day after Benedict’s announcement that he had joined the ranks of cardinals.

“You’re not even sure if people will give you a fair hearing,” said Tagle, who has been described as a “golden child,” a rising “star,” and a potential papal contender.

“You may be saying the right things but people will not listen to you if the manner by which you communicate reminds them of a triumphalistic know-it-all type of institution,” said Tagle, who became head of the Manila archdiocese upon the retirement a year ago of Gaudencio Cardinal Rosales.

“I am also consoled by the assurances of prayer and support from so many people. But I am terrified by the magnitude of the task at hand,” Tagle said in his official statement issued from Rome, where he is attending the monthly synod of bishops on new evangelization.

“It requires a further broadening of the horizon, a careful study of worldwide developments in society and the Church and an intensification of the mission of the Archdiocese of Manila and the Church in the Philippines, even in different parts of the world, especially in Asia.”

Henrietta de Villa, a former ambassador to the Vatican, said: “I’m ecstatic. God must really love the Filipinos. Only last Sunday, the gift of a new saint, St. Pedro Calungsod, an example of faithfulness and selfless love. Now, a new cardinal for the Philippines, one who follows the Lord, is humble of heart, and teaches with authority because he lives what he preaches.”

“He will have a lot of time to prove himself,” said retired Archbishop Oscar Cruz. “That’s 20 years for him to be able to work and serve the Church. He is a very good theologian, very kind and holy.”

Cruz noted Tagle’s service under Benedict when the pontiff, as then Cardinal Joseph Ratzinger, headed the Sacred Congregation for the Doctrine of Faith. He said it was possible that Tagle would be appointed to head that body, previously known as the Supreme Sacred Congregation of the Roman and Universal Inquisition. “That’s a higher position,” he said.

Activist “running priest” Fr. Robert Reyes, a classmate of Tagle at the Jesuit-run San Jose Seminary, said he knew the archbishop was going to “climb high in the ecclesiastical ladder.”

“Not only was he very intelligent, he was also very humble and very generous,” he said. “So we knew even then that there was something extraordinary here. The Church is looking for future leaders. Whether he becomes Pope or not, the challenge for him is to remain humble and simple,” he said.  He recalled that Tagle had “always reminded us not to lose the connection with the poor.”

While at the seminary, Tagle served as conductor of the choir under Jesuit Fr. Eduardo Hontiveros, considered the father of Catholic liturgical music in the country, Reyes said.  “What we need in the Church now is a good conductor who will make everyone sing in tune because we have so many discordant voices in Church and society.”

Activist priest Fr. Joe Dizon, convenor of Solidarity Philippines, said Tagle should use his office for his “prophetic witness” to denounce society’s ills.

“The red hat of the cardinal symbolizes his readiness to shed his blood … for the Church, the Church of the Poor. It is expected that he would be a prophetic witness, denouncing evil, announcing good—as a cardinal of the Catholic Church,” Dizon said.

Writing in his blog, “Whispers in the Loggia,” American Church analyst Rocco Palmo said Tagle could become “the star” of the consistory on Nov. 24 at the Vatican.

“Consistories are never about the past, but the future… and as each one tends to have its  ‘star,’ it’s a pretty obvious call that the coming intake will be decidedly Chito-centric,” Palmo said, referring to Tagle’s nickname.

“Named to his post a year ago last week, the singing, weeping, bike-riding and, YouTubing 55 year old—a member of the progressive-leaning  ‘Bologna school’ team of Vatican II historians—clearly hasn’t been dubbed the ‘golden child’ for nothing,” he said.

Veteran Italian journalist Sandro Magister noted in his blog that Tagle was named a cardinal even after a Vatican prelate criticized the chapter he wrote in the controversial “History of Vatican Council II” produced by the liberal “School of Bologna” group of scholars.

Magister noted that the curial archbishop Agostino Marchetto, in a book published by the Vatican, criticized Tagle’s chapter as “a rich and even comprehensive study, but unbalanced,” written in “journalistic language” and here and there “lacking the objectivity required of the true historian.”