Philippines rolls out welcome mat for US warship 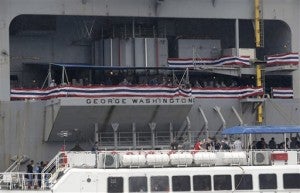 US sailors from the US Navy aircraft carrier USS George Washington board a ferry for a short liberty off Manila Bay Thursday . AP PHOTO

ABOARD THE USS GEORGE WASHINGTON— A US Navy aircraft carrier strike force’s visit to Manila is the latest show of American military might partly aimed at countering China’s grip in Asia. But it also provides hundreds of Filipino American sailors a chance to briefly soak in the warm embrace of a second home.

US sailor Ryan Regondola, who was born in the southern Philippine city of Davao, said Thursday that the nuclear-powered USS George Washington’s five-day visit underscores America’s enduring friendship with the Philippines. He’s also excited that the mission means a brief reunion with his Filipino dad, as well as Manila street delicacies including balut — boiled duck egg loved by many for its unique taste, but dreaded by others because of the half-formed, feathery embryo that pops out as an eater munches.

“I missed out a lot, so I’m catching up,” Regondola told The Associated Press on board the hulking warship anchored at Manila Bay. “It feels great to be back home.”

The Philippines has reached out to the United States, a longtime defense treaty ally, for help in modernizing its acutely outdated fleet of warships and planes and in training its troops amid renewed entanglement in long-running territorial disputes with China in the South China Sea.

Manila’s desire to bolster its external defense and security cover has dovetailed with America’s intention to pivot away from years of heavy military engagement in the Middle East to Asia, where it has been trying to foster closer economic and military alliances with countries such as the Philippines partly as a counterweight to China’s rising clout.

In a highly symbolic gesture in May last year, Philippine President Benigno Aquino III, accompanied by senior members of his Cabinet and military chief of staff, was flown to the USS Carl Vinson to welcome the American warship as it traveled in the South China Sea toward the Philippines for a Manila visit.

The 97,000-ton carrier had just journeyed from a historic mission in the North Arabian Sea, where it had received the Navy SEALs team that carried the body of Osama bin Laden, who was killed days earlier in a highly secretive US commando assault in Pakistan.

Since then, there has been an increasing tempo of high-profile port calls and visits by US warships, submarines and aircraft, including the George Washington, which visited in 2010 and steamed back into Manila Bay on Wednesday for small military exercises and civic projects and to let loose thousands of its crew for a few days of liberty in the bustling Philippine capital.

Manila Mayor Alfredo Lim welcomed Capt. Gregory Fenton, the commanding officer of the George Washington, which will host a reception for hundreds of Filipino dignitaries and military officials.

About 800 of the carrier’s 5,500-strong force were either born in the Philippines or are of Filipino descent, according to Fenton.

Navy officer Dioscoro Crucillo had longed wanted to visit his sisters in the Philippines, but managed to return only this week after not seeing them for 21 years. He said he wanted his homecoming to show that he hasn’t changed, that he’s still “a native son, proud of both worlds.”

Another Navy man aboard the George Washington, 19-year-old Spencer Rhoades, is the son of a Filipino woman and an American rail engineer.

His parents brought him to the poor central Philippine province of Samar, where his mother is from, when he was 5 years old, and he did not return to the country until this week. Rhoades said he was aware of the geo-political issues surrounding the American presence in Asia but would rather simply enjoy getting back to his roots for now.

“I see a lot of it on the news, in the newspapers, and it’s hard not to think about it,” Rhoades said. “When I come here, it’s just to relax, get off work a little bit and just kick my feet up … I get to see where my mom is from and see the culture.”

From the George Washington, passenger boats ferry hundreds of American sailors in casual clothes to the Mall of Asia, one of Asia’s largest shopping centers, where some bars blared loud disco music on a rainy noontime Thursday to attract the visitors. Smiling mall workers handed umbrellas to the large throng of sailors.

Such US military presence in the region has in the past annoyed China, which has warned the United States not to intervene in territorial disputes Beijing says should be dealt with one-on-one by Asian claimants.

Amid the murky situation, Washington has walked a tightrope by providing military support to allies like the Philippines and declaring that it will help ensure freedom of navigation in disputed South China Sea areas, while also saying it does not take sides in the disputes to avoid being drawn into the wrangling.

“We are firmly committed to helping support the nations that are involved in the disputes, but ideally we’d like to see them sort out their disputes via diplomatic channels,” Fenton told reporters.

“We’re very sensitive to the areas that are under disputes,” he said. “We do make a very conscious effort to stay away from those areas.”