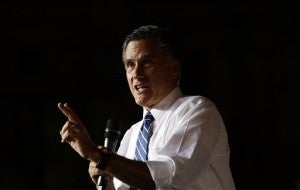 WASHINGTON – An adviser to President Barack Obama warned Wednesday that Mitt Romney could set off tensions with China if elected, as the Republican challenger vowed a tough line on issues from trade to human rights.

Representatives from the two campaigns held a debate on China policy ahead of the November 6 election in the wake of charges by Romney that the Democratic incumbent has shown too much deference toward the rising Asian power.

Jeff Bader, who was Obama’s top aide on East Asia until last year and serves on a committee of his re-election campaign, attacked Romney’s repeated pledge that as president he would immediately brand China as a currency manipulator.

“The idea of doing it on the first day in office I find, frankly, astonishing,” Bader told the debate held by the Committee of 100, a Chinese American group, and Johns Hopkins University’s School of Advanced International Studies.

Bader, while not ruling out using the threat of such action to pressure China, said that Beijing will “not be in a passive or submissive mood” considering that a new leadership is taking over in 2013.

“The Chinese will retaliate, this I can guarantee. The Chinese do not take these things quiet. This will prejudice relations from day one,” Bader said.

US officials accuse China of deliberately keeping its yuan low to flood the world with cheap exports, devastating US manufacturing. Treasury Secretary Timothy Geithner has preferred diplomacy instead of a formal declaration of currency manipulation, which could lead to punitive action.

Aaron Friedberg, co-chair of the Romney campaign’s Asia-Pacific working group, said that the United States should not be “paralyzed” by fear of China’s response, repeating Romney’s assertion in a debate with Obama on Monday that the world’s two largest economies effectively were already in a trade war.

“Labeling China a currency manipulator would not trigger Armageddon,” Friedberg said at the debate.

“It would put China on notice, it would begin a process of discussion and ultimately negotiation between the United States and China and, if necessary, it would be followed by the imposition of countervailing duties on some products on a sliding scale,” he said.

The yuan has appreciated by around 30 percent against the dollar since 2005, although many analysts believe that China was responding mostly to inflationary pressure.

Friedberg, who served under former vice president Dick Cheney, also supported cooperation with China but said Obama’s policy “has to be judged by its results — and the results have not been good.”

“Bilateral relations between the United States and China today are strained. Beijing continues to behave assertively, even aggressively, towards its neighbors including some of our treaty allies,” he said, in likely reference to China’s disputes with Japan and the Philippines.

Friedberg also criticized the Obama administration’s tone on human rights, including Secretary of State Hillary Clinton’s remarks at the start of her term that concerns with China would not “interfere” with cooperation on other areas.

Bader said that Asian nations had welcomed Obama’s renewed focus on the region. He pointed to Clinton’s staunch defense of freedom of navigation in the tense South China Sea and Obama’s decision to post up to 2,500 Marines in Australia.

He shot back at the criticism on human rights, denouncing Romney for putting out a critical statement after Chinese dissident Chen Guangcheng left the safety of the US embassy in May under a deal between Washington and Beijing.

“That was irresponsible. It was factually wrong. He wasn’t thrown out — he went because he wanted to and changed his mind,” Bader said.

“It was a really clumsy intervention into a very sensitive diplomatic process where a life was at stake,” Bader said of Romney’s remarks.

Romney at the time said it was a “day of shame” if US officials communicated threats to Chen’s family that motivated him to leave the embassy.

US officials adamantly denied such assertions and said that Chen wanted to exit the embassy. They later negotiated a new agreement with Beijing in which Chen was allowed to go with his family to New York.

Bader said he hoped that China and the United States develop as “partners rather than enemies” and that it was critical to show respect toward the Chinese, who hold a historical “sense of humiliation.”