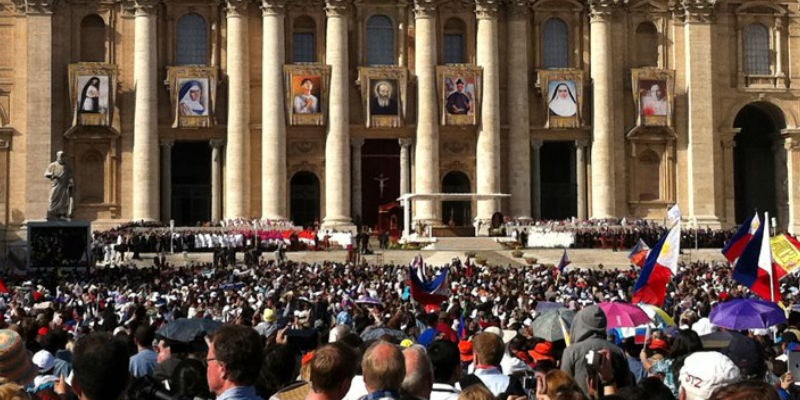 At least 5,000 Filipino pilgrims traveled to Rome for Calungsod’s canonization. Some Filipinos came from other countries like the United States. PHOTO CONTRIBUTED BY ROLAND F. CASTILLO

The weather was chilly but the Filipino pilgrims were already waiting outside the gates of St. Peter’s Square as early as 4 a.m. Sunday.

The gates were finally opened at 8 a.m. (2 p.m. in Manila), or about four hours later, but no one was heard complaining. Instead, the atmosphere was happy and festive.

“The Filipinos were greeting each other. It was also a reunion of sorts because we met some friends whom we have not seen for a while,” Fr. Mhar Balili, chairman of the liturgical committee for the canonization of Blessed Pedro Calungsod in Rome, said in a long-distance interview with the Philippine Daily Inquirer.

“It was festive. The pilgrims were excited. They didn’t mind the cold. Some may not have had breakfast yet because they were here as early as 4 a.m.,” said Balili, a priest from Cebu who is in Rome studying to be a licentiate in liturgy.

Santiago “Sonny” Academia, who was part of the Filipino delegation, told the Inquirer in a text message that the Filipinos were all dressed in layers of clothes, jackets or sweaters, and scarves for the neck, to fight off the autumn cold.

Academia, district servant leader of the Catholic Charismatic group Bukas Loob sa Diyos, said the Filipinos had been lining up since 5 a.m. on a very chilly morning to get into St. Peter’s Square.

The Filipinos brought sandwiches for sustenance, knowing that the ceremonies would run for three hours and the wait, longer.

But it was all worth it.

“Filipino delegation seated at the front section of St. Peter’s Square. [It’s a] gift from St. Pedro Calungsod after queuing since 5 on a very chilly morning,” Academia said in a text message to the Inquirer.

At least 5,000 Filipino pilgrims traveled to Rome for Calungsod’s canonization. Some Filipinos came from other countries like the United States.

But Academia said the atmosphere was festive because pilgrims from the countries of the six other Catholic witnesses who were canonized along with Calungsod also came for the ceremonies.

The six were Jacques Berthieu of France, Giovanni Battista Piamarta of Italy, Maria del Carmen of Spain, Anna Schaffer of Germany, and Kateri Tekakwitha and Mother Marianne Cope, both from the United States.

Tekakwitha is the first American Indian (Mohican) to become saint.

But the Filipinos could easily be spotted in the crowd, according to Academia. Aside from their great number, most of them carried and waved small Philippine flags.

“Yes, Philippine flaglets are everywhere. And about a dozen big flags are waving in the air in various areas of St. Peter’s Square,” Academia said.

Fr. Dan de los Angeles, who was also part of the delegation, said security was strict at St. Peter’s Square. He said they were not allowed to bring any metal object and bottled water, “just like in the airports.”

De los Angeles said the Filipinos brought with them provisions for breakfast and lunch since they had been up since 4 a.m. and knew that the ceremonies would end in the afternoon.

De los Angeles said the Filipinos patiently waited to get into the square.

“There were two levels of cordon. And it took time before these were opened to allow the pilgrims to get in,” he said.

De los Angeles could not give an estimate of the crowd’s size, as he felt like he had been swallowed by the multitude.

The people were “packed like sardines,” he said, but there was no shoving or pushing. No one even complained, he added.

Instead, De los Angeles said the pilgrims happily chatted with fellow pilgrims while waiting to be allowed into St. Peter’s Square.

“You can hear people speaking in Cebuano, others in Tagalog. They were happy and excited but never loud,” he added.

While it was a real sacrifice to stand for hours on a chilly Sunday morning, De los Angeles said the pilgrims appeared to be ready for it, “even the elderly.”

The largest delegation came from  Cebu and other parts of the Visayas, estimated at 5,000. The largest  number of clergy from a single archdiocese was from Palo, Leyte, headed by Archbishop John Du, who came to Rome with 33 priests and seven new deacons.

For those who were not able to go to Rome, Msgr. Roberto Alesna, parish priest of Cebu Cathedral, said they could go to the thanksgiving Mass to be held in the cathedral at 5 p.m. on Nov. 30.

The coming together in Rome is a miracle of St. Pedro Calungsod, according to Most Rev. Leopoldo Jaucian, S.V.D., bishop of Bangued, Abra.

“San Pedro Calungsod gathered all Filipinos from all over the world to give witness to their faith through his canonization,” Jaucian said.

From the Archdiocese of Cebu comes this biography of the new saint. Pedro Calungsod was a teenage lay Catholic from the Visayas who served the Jesuit mission in the Marianas as a catechist and helper from June l6, 1668, until his death on April 2, 1672.

Like many catechists and helpers of the missionaries, he was a silent and humble minister who did his duty faithfully and had no historians to tell his deeds to future generations. His family is unknown. His backgrounds is unrecorded.

His name appears only in the documents on the martyrdom of the Jesuit missionary Fr. Diego Luis de San Vitores, head of the  Marianas mission with whom he was killed.

Pedro was the lone companion of San Vitores on that Saturday morning of April 2, 1672, in the village of Tumhon in Guam, catechizing and baptizing the natives. To stop them, two villagers hacked them to death.

Their bodies were thrown into the ocean, never to be found again.

South Cotabato Archbishop Orlando Quevedo in his homily during the Triduum Mass at Santa Maria Maggiore on Saturday called St. Pedro Calungsod the new idol of young people to proclaim and live their faith.

Fr. Clod Bagabaldo, the young parish priest of the Most Holy Redeemer Church in Quezon City, said young people like Calungsod would not leave a friend behind, like the new saint did not leave San Vitores when he was attacked and tried to save him.

“No one leaves anybody in the lurch,” Bagabaldo said.