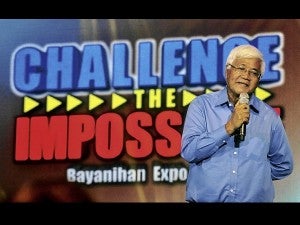 In the spirit of bayanihan (communal unity), everyone takes part and no one gets left behind— even those from faraway lands.

Volunteerism in the Philippines just welcomed one of its largest supporters from beyond the country’s borders when the Berjaya Group, one of the biggest conglomerates in Malaysia, committed a P300-million donation to Gawad Kalinga (GK) for the construction of new homes for victims of Tropical Storm “Sendong” in the next three years.

Berjaya chair Tan Sri Dato Seri Vincent Tan handed a P100-million check as an initial donation to GK chair Tony Meloto on Friday at the Bayanihan Expo 2012, a public-private volunteerism summit that aims to gather Filipinos “who are championing the work of nation-building.”

“I can tell you, there is nothing more heartwarming than to be given the chance to help the effort … having seen how Sendong created havoc enough to break the will of people. But the Filipinos’ soul is never broken, and that’s what makes them admirable,” said Tan in remarks at the event held at the SMX Convention Center in Pasay City.

“Housing is a basic need that should be guaranteed to everyone… that’s why we are presenting GK with P100 million every year for the next three years,” said the Berjaya chair, drawing loud applause from the audience.

The Malaysian firm handed the donation as it expands its business in the Philippines, including an interest in air operations. Berjaya has current gaming and hotel operations in the country.

Impressed by the resilience of Filipinos, Tan said his firm had high confidence in the current administration and he would spread the word that the Philippines was a good place to invest in.

“We believe in the potential of the Philippines and are very happy and honored to be able to participate in this economy and social development. We would tell everyone that the Philippines is open for business,” Tan told the crowd of about 6,000 development workers and local government officials.

“We would tell everyone that it is more fun in the Philippines and that the Filipinos are worth living and working with,” he added.

For Meloto, the Malaysian donation signifies how GK, as an organization, has gained trust and recognition both here and overseas. Founded in 1995, GK is the country’s leading volunteer organization that builds homes for the poor and victims of natural calamities.

The organization is closely involved in the construction of new houses for victims of the December storm that devastated the cities of Cagayan de Oro and Iligan.

“I know that this outpouring of generosity for Filipinos who have known tragedy comes from the heart. It’s a real bridge between our countries,” said Meloto in thanking Berjaya.

Organized by the Presidential Communications Operations Office, the two-day Bayanihan Expo, which closes Sunday, brought together volunteer groups from different parts of the country in discussions on the pursuit of inclusive change and building the middle class, among other things.

With the theme “Challenge the Impossible,” the expo sought to advocate a mind-set of hope and cooperation. In the words of PCOO Secretary Herminio Coloma: “Walang iwanan sa Pilipinas natin (No one will be left behind in the Philippines).”

“This is important because now there are many people who are still left behind by the flow of progress,” said Coloma, pointing out that 90 percent of the population belong to classes D and E.