A ‘terno’ Ambassador in Dubai 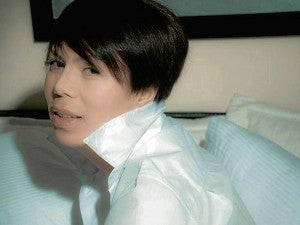 FILIPINO fashion designer Ezra Santos is earning kudos abroad for his terno-inspired creations. Notice the butterfly sleeves on his designs that have been featured in Middle East-based magazines.

First and foremost, one has to have a passion for something in order to succeed, says Dubai-based Ezra Santos, one of the top designers in Dubai.

In cosmopolitan Dubai, a true melting pot of cultures, making it in the fashion scene is extremely competitive.

Proof of Ezra’s success is his portfolio of A-list clients—from international celebrities, Arab royalty to affluent local clients like Gretchen Barreto and KC Concepcion. Lebanese singer Haifa Wehbe is also on his list.

Today, Ezra is considered one of the most influential designers in the Gulf States. He is known for his masterful cutting and precision tailoring.  His fashion shows are one of the most awaited in the region and they are watched as barometers of what’s next to come.

In his much talked about first solo fashion show in Dubai, he made every Filipino in the audience beam with pride with his reinvention of the Filipino terno. “In my first collection, I used our very own butterfly sleeves and made it very modern and up-to-date which made a great impact.” The traditional terno suddenly metamorphisized into sleek and modern butterfly sleeves with a new seamless look. The result was a more feminine touch and a universal look.

He made his fashion debut in New York for the Couture Fashion Week last year where he brought his Spring and Sumnmer 2011 collection with an Africa-in-Gold theme.

A product of Central Saint Martins in London, Ezra Santos has more than two decades of hands-on experience and hardwork.

Indeed, this Manileño has come a long way. He started sketching designs in his grade school years.  After high school, he enrolled in a Fine Arts course. Fashion became his passion and he pursued it.

He took up courses in Central Saint Martin’s in UK, honing his skills in draping and cutting.  Does one have to go to a fashion school in order to succed? His reply: One learns the basics in school but “in the proper time of reckoning, it is one’s love and passion for the industry that matter most.” 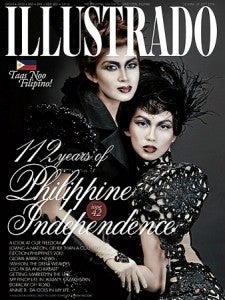 Ezra says he studied the look and feel of French designer Erte, “His art deco-influenced creations from his heyday in the 20’s through the 60’s” made an impact on Ezra.  He also mentions his admiration for Christian Lacroix, for his unique use of color and their “unimaginable combinations,” as well as for John Galliano and Christian Dior.

After graduating, Ezra worked for a year in a fashion shop in Makati. He said his journey abroad started when he got an offer to work in Saudi Arabia, which he now considers a blessing in disguise. He agreed because he was curious about working abroad. He accepted a five-year contract in Saudi then he got a job offer to work for the prestigious House of Arushi in Dubai as a fashion in-house designer in 1993.  After working there for 10 years, he finally opened his own haute couture shop in 2004.

Ezra says, “I love Dubai because of the opportunity that it gave me to open up my own haute couture shop. I also love the intermingling of the different cultures that makes Dubai so cosmopolitan.”

He says the biggest challenge in Dubai was his being Asian in a highly competitive industry dominated by Caucasians and Arabs. He was an outsider. But his talents have proven him  world-class.

He credits his London training for building up his confidence. It gave him a stimulating experience of learning in a multicultural environment.  Being Filipino is not always a disadvantage, Ezra says. Filipinos are  known to be resilient and hardworking, he says.  “As it is, people are generally in awe of Filipino artistry,” he adds.

Putting up your own haute couture shop is a test of one’s reputation and talent.  A devout Catholic, Ezra believes  it was God’s providence that he got an offer for a business partnership when he was ready to open his own atelier. He had to start the hard way—he was the designer, the accountant, the secretary and also had to serve coffee to his clients.

His networking talents helped him grow his business.  “I have a set of friends that I have gathered in my long years of work abroad. I believe I have earned them as each of us have proven each other’s loyalty and sincerity. Any challenges I come across are easily hurdled with friends around.” he says. 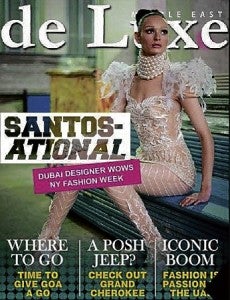 First, get good people.  “I have joined numerous shows abroad which was necessary for the advancement of my brand and they were made easier and more pervasive with the help and assistance of my publicists and public relations people.”

Secondly, the fashion industry is fast paced and very dynamic, so “there is no room for complacency.  To make it, one has to be on one’s toes always.”

Thirdly, imbibe a global mindset. Fourth, study continuously. “One needs to be always updated on what’s happening in other parts of the world.”

Fifth, you have to be yourself and create something remarkable in the fashion industry. Again, you need to have real passion for fashion.

Actor not as inherently ‘flawless’ as he appears