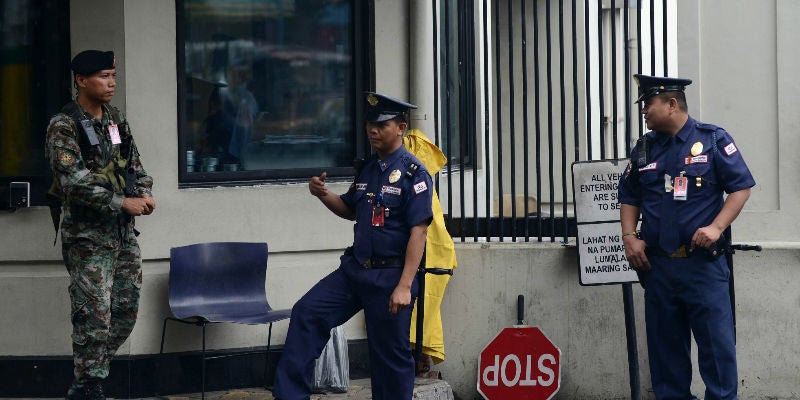 Armed policemen secure the entrance to the US embassy compound known as ‘Seafront’ in Pasay, a major district in the capital, south of Manila on September 29, 2012. The United States issued a security alert for the Philippine capital of Manila on September 28, warning its citizens they could be the target of an unspecified attack. AFP PHOTO/NOEL CELIS

MANILA, Philippines—The Philippines said Sunday it had moved to secure Western embassies in the country as it monitors potential threats to their citizens following a security alert raised last week.

On Friday, the US embassy warned that an unspecified threat against Americans in the capital Manila had been detected by “reliable security forces.”

Britain, Canada and Australia on Saturday joined the US in issuing a security alert, warning Westerners to be on guard amid fears they could get caught up in an attempted attack against Americans.

“As a matter of precautionary measures, we responded to their request to augment security,” Valte said on government radio, adding that it had also “responded quickly” to improve security for the other missions.

While the US embassy did not elaborate on the threat, Philippine and Western intelligence officials have previously warned that Al Qaeda-linked militants were known to maintain sleeper cells in Manila.

In November 2010, the US government warned of an imminent attack, particularly in areas frequented by foreigners in the capital.

This prompted similar travel advisories from Britain, Australia, Canada, New Zealand and France, but the attack never materialized and the government criticized them for hurting the country’s tourism prospects.

Of particular concern to foreign governments is the Abu Sayyaf, a small band of militants founded in the 1990s with seed money from Osama bin Laden.

The group is blamed for the country’s worst terrorist attacks, including a ferry bombing on Manila Bay that killed over 100 in 2004.

It is also behind a rash of high-profile kidnappings targeting Western tourists, missionaries and local business people.

However, the Philippine military with help from US intelligence has captured or killed many of the Abu Sayyaf’s top leaders in the past decade.

Lieutenant General Juancho Sabban, a senior Marine official once tasked with going after the Abu Sayyaf, said Sunday the group’s links to foreign terrorists had been cut, though they remained a threat.

“We have always said their capabilities have been downgraded, but it’s difficult for us to say that there is zero threat,” Sabban said.

“We are exerting a lot of effort in monitoring these potential threats.”