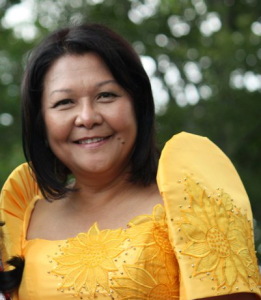 She was the driving force behind the 14-year Philippine Fiesta in America held annually at the Meadowlands Expo Center in Secaucus, New Jersey. “She was a hands-on manager and a perfectionist,” said her husband Nanding.

She is survived by Nanding, their two sons Nathan and Mervin and daughter Makee. Mila is the daughter of Faustino Beltran and Milagros Dado, both deceased. Her siblings are Armando Beltran, Erlinda Tugaoen, Danilo Beltran, Virginia Bautista, Hilario Beltran, Carolina Tolentino, and Isagani Beltran (deceased).

Loida Santos, the Mendez couple’s personal assistant, said she received an early morning text from Nanding saying “Tita Mila has passed away at around 2 a.m.”

Mila was very active in community affairs and services, and served as patron of many young musical talents and stage performers. She had received numerous awards and recognitions through her participation in various Filipino projects. She was a consistent valedictorian throughout her school years, said Nanding.

If you asked Mila her greatest accomplishments, she would tell you it’s raising two sons and keeping a family together with her husband of 36 years.

Older son, Nathan, studied computer science and plays a very significant role in the day-to-day operations of their graphics and special events business. Younger son, Mervin, is into film editing and cinematography.

Mila and Nanding, recognizing the need to be involved in the development and enhancement of skills and talents of Filipino children in the New York Tri-State, launched the search for the Outstanding Filipino American Youth Leaders in 2001. The search was organized through their company, Special Edition Press, Inc.

“Everytime I see her in the NY Metro area she’s always running around like a busy bee. So busy with her Philippine Fiesta and other production events,” writes former co-worker Ana Marie Regaliza-Datuin on Mila’s Facebook wall.

Filmmaker Luis Pedron writes, “Tita Mila, thank you for giving to us numerous years of fun and culture through your event Philippine Fiesta. It will be your legacy to us in the NYC area.”