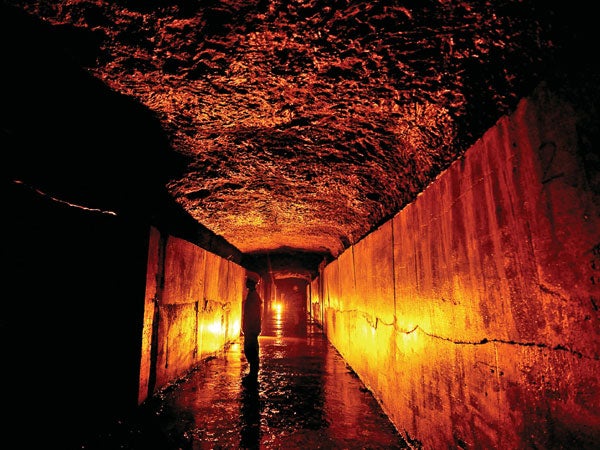 FORT BONIFACIO TUNNEL A man walks inside the Fort Bonifacio Tunnel in Taguig, dug by Igorots in the early 1900s. The tunnel is approximately 30 meters below the surface, 4 meters wide and passable through a length of about 2.24 kilometers. RICHARD A. REYES

If you are a shopaholic who frequents the ritzy stores in Boni High Street or a resident of one of the upscale condominium buildings within Bonifacio Global City (BGC), chances are you’re missing an important piece of history.

Unknown to many, underneath the swanky commercial and residential district of BGC in Taguig City lies a 2.24-kilometer-long tunnel that  witnessed some of the most violent episodes in the country’s fight for liberation during the American and Japanese occupation periods.

To honor the historical significance of the structure, the Bases Conversion and Development Authority (BCDA) is rolling out a master plan to restore the underground passageway, known to the military as the Fort Bonifacio War Tunnel.

The century-old tunnel is known to historians. Cornered Japanese troops holed themselves up inside it toward the end of World War II—until American soldiers used flamethrowers to flush them out.

“It was said that even a year after the war, Japanese troops were still coming out of the tunnel and that some of them were gunned down by Filipino soldiers who were strategically positioned at the exits of the tunnel,” the BCDA said in a statement.

On Thursday, BGC and BCDA officials opened the tunnel to selected members of the media as part of the campaign to promote public awareness of the historic underground passageway.

Arnel Casanova, BCDA president and chief executive officer, said the project was intended to protect the tunnel and turn it into a heritage site.

“I believe that beyond the economic development that we have seen in BGC, the beautiful cities we build should have a ‘soul,’” Casanova said.

“The restoration of this tunnel is a perfect example of how we value our past. It’s also a way to immortalize the heroism displayed by the Filipinos who fought and died for our freedom,” he said.

With the help of BGC and Fort Bonifacio Development Corp., Casanova said the BCDA would invite private companies to help them finance the rehabilitation project.

He said the restoration of the tunnel system “aims to contribute to the people’s understanding and appreciation” of the former site of Fort Bonifacio.

“Most of us walk over that area every single day without knowing that we are actually passing by a very vital structure that helped mold our nation,” Casanova said.

From its main entry point near the Market! Market! shopping mall, the tunnel located underneath the eastern portion of the BGC now leads to two exit points—one to Amapola Street in Barangay Pembo and the other to 27th Avenue in Barangay (village) East Rembo, both in Makati City.

Retired Brig. Gen. Restituto Aguilar, former director of the Philippine Army Museum, said American forces ordered the construction of the underground channel in the early 1900s after the Filipino-American war.

Aguilar said the Americans brought in miners from the Cordillera region to lead the excavation and construction of the passageway.

“Since there were no modern equipment then, the Filipinos used only pick and shovel to dig up the area. They actually spent decades before the tunnel was used by the Americans,” Aguilar said.

Aguilar said the burrow was first used as an “underground highway” to bring military supplies, such as medicines, medical equipment and food, to US troops based in Fort McKinley, later named Fort Bonifacio, the main camp of the Philippine Army.

“Because there were no concrete highways then, the tunnel served as the underground highway for the American forces,” Aguilar said.

In 1936, Gen. Douglas MacArthur, then the American military adviser to  President Manuel Quezon, ordered the expansion of the tunnel. It was intended to be used as MacArthur’s headquarters and stockroom for military supplies.

“The Americans were actually readying it as a shelter for their troops if the Japanese would launch an air strike on Fort McKinley,” Aguilar said.

He said the 4-meter-wide passageway used to have channels that connected it to several vital US military buildings in Fort McKinley, such as hospitals and commissary units.

“The Americans ferried their troops’ supplies from Manila Bay through the Pasig River. This tunnel is said to have a portion that actually leads to the Pasig River,” Aguilar said.

From the river, the Americans used wooden carts similar to those used in mining sites to bring military supplies to their troops.

When the Japanese imperial forces invaded the country, they took control of the passageway from the Americans and used “forced labor” to further expand it.

Damaged due to neglect

Aguilar said the Japanese built an additional exit outside Fort McKinley that stretched up to the current location of Villamor Air Base in Pasay City.

In 1976, then Army commander Maj. Gen. Fortunato Abat ordered the 51st Engineering Brigade to rehabilitate the tunnel, which had been badly damaged due to neglect.

The walls and other portions of the tunnel were cemented to prevent it from collapsing.

Aguilar said the underground structure was eventually opened to the public and became the “main attraction” of the Philippine Army Museum and Library Complex.

But its main entrance had to be closed when the museum was torn down in 1995 to give way to the massive commercial development and privatization of the former military camp.

“After that, a few Filipinos remember that a tunnel existed underneath Fort Bonifacio,” Aguilar noted.

Adventure seekers who don’t want to leave the city will actually find the 21-meter-deep channel a perfect weekend getaway.

From the surface, one has to take a 17-step concrete stairway and another 59-step stairway to reach the tunnel’s main portion.

The passageway has 32 chambers that the American troops used as storerooms. It also has a 6-meter-deep well, which was the main water supply for the US and Japanese soldiers.

When the BCDA started developing the area in 1995, Aguilar said some outsiders were able to discover the tunnel’s main entrance and vandalized its walls.