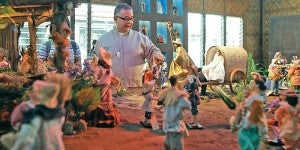 A joint team of the National Bureau of Investigation  and the Department of Environment and Natural Resources (DENR) will run after traders and collectors of ivory pieces acquired after the ban in 1981.

Isabelo Montejo, DENR director for Central Visayas, told the Philippine Daily Inquirer that the investigation would not center on Msgr. Cris Garcia, who was linked by a National Geographic article to smuggling of ivory.

Montejo said Garcia, being a collector, would be asked to help investigators identify not only traders but also collectors of ivory pieces.

The DENR director, however, said it was “unfortunate” that Garcia had become the center of controversy following the NatGeo article.

“In fairness, anybody who is in possession of newly acquired ivory will be prosecuted. We will confiscate [the illegal items],” Montejo said.

Louie Nacorda, an iconographer in Cebu, said the crackdown might create a stir among collectors. He wondered how the DENR and the NBI could determine whether the ivory pieces were acquired before the 1981 ban.

“Do they have a machine that will determine if the [ivory] piece is before 1981?” Nacorda asked.

He pointed out that the age of an ivory could not be determined by its mere appearance or smell.

“How do you determine the age of ivory? I don’t know [either]. On the surface, they all look the same,” he added.

He cited the life-size image of the Our Lady of the Rosary of “La Naval” at Sto. Domingo Church in Quezon City, considered the oldest ivory icon in the Philippines.

Although it was carved in 1593, the image is so well preserved that it looks new.

Nacorda wondered how the investigators would pin down the collectors if they didn’t have the equipment to determine the age of the ivory.

Even if investigators found raw ivory, they could not be sure if this was new, he said.

“If I may give an advice, instead of taking on the collectors, they should go after the traders. Ivory images are openly sold in Manila,” Nacorda said.

Nacorda, who owns fewer than 20 ivory pieces, said some of his collections were bought in Manila. The rest were heirloom pieces.

Montejo said the DENR and the NBI had agreed to ask experts from the National Museum of the Philippines to help them identify the ivory.

Garcia was implicated by a NatGeo report, titled “Ivory Worship” and written by Bryan Christy, in the illegal trade of ivory in the Philippines.

The monsignor reportedly advised Christy on how to smuggle religious icons made from ivory into the United States and gave the names of his favorite ivory carvers in Manila.

The NatGeo report prompted the DENR to conduct an investigation of illegal trade of ivory in the Philippines, particularly those acquired after 1981, the year the Philippines became a signatory to the Convention on International Trade in Endangered Species of Wild Fauna and Flora (CITES).

During the meeting on Thursday morning, DENR and NBI officials in Cebu agreed to conduct a joint investigation. The NBI would be the lead agency while the DENR would be represented to provide the expertise.

Edward Villarta, NBI director for Central Visayas, said the investigation would focus on “personalities” involved in the illegal trade.

Montejo said he was hoping that Garcia would lead the team to the source of the ivory trade because the monsignor was a buyer.

He said he might ask the NBI head office to get in touch with Garcia, who was confined in a private hospital in Manila.

A diabetic, Garcia is suffering from hypertension. He left Cebu in June to seek medical treatment in Manila.