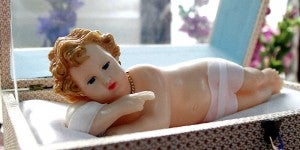 CEBU CITY—Cebu Archbishop Jose Palma has ordered an inventory of all ivory pieces owned by Msgr. Cristobal Garcia, whom National Geographic linked to the illegal ivory trade, to determine if these were acquired before 1981, the year the Philippines became a signatory to an international ban on ivory trade.

Palma on Wednesday said the Archdiocese of Cebu would cooperate in the investigation being conducted by the government and would not condone the illegal trade of ivory.

Msgr. Achilles Dakay, media liaison officer of the archdiocese, said the NatGeo article was biased and created the impression that Garcia had benefited from the killing of elephants so he could make ivory pieces.

“We likewise need to clarify the claims made by the author of the article on the supposed perception of the religious icons among Filipinos,” the Catholic Bishops’ Conference of the Philippines (CBCP) head said.

“While it is true that icons are venerated by us because through them, we are able to tangibly express our faith in God and our devotion to the saints, in no way does the Church teach that these icons are in fact God Himself or the saints themselves,” Palma said.

“Any encouragement promoting such idolatry is contrary to Church belief and must be purified,” he added.

Palma told reporters that some people he knew had sent letters of complaint to NatGeo.

Ivory not for new images

“The Church does not condone ivory smuggling or other illegal activities, although in the past, ivory was one of the materials used in the adornment of liturgical worship,” Palma said in a statement, which he read at a news conference in the Archbishop’s Palace here.

His statement was posted on the website of the Church-run Radio Veritas.

Palma, also president of the CBCP, said the religious artifacts made of ivory were acquired long before a ban on ivory trading was imposed.

“While these ivory artifacts crafted long before the ban are considered the cultural heritage of the Church, in no way does the Church encourage the use of ivory for new implements,” Palma said.

In fact, the archbishop said he was a signatory to the People for the Ethical Treatment of Animals (Peta)’s petition to transfer Manila Zoo’s lone elephant, Mali, to a sanctuary in Thailand.

Palma asked that Garcia be given fair treatment in the wake of the controversy linking him to the illegal trade of ivory.

“The account given by National Geographic magazine needs to be assessed as to its veracity, considering that the article smacks of bias against religious practices,” he said in a statement.

In his article in the October issue of the magazine, Bryan Christy said the demand in the Philippines for religious icons made of ivory had been causing the death of thousands of African elephants.

The investigative report, titled “Ivory Worship,” also included revelations by Garcia, the former head of the Archdiocese of Cebu’s Commission on Worship, on the illegal trade.

The Department of Environment and Natural Resources (DENR) in Central Visayas has started its investigation of the illegal ivory trade in Cebu.

Ariel Rica, DENR chief of the biodiversity and wildlife section, went to the Archbishop’s Palace to inform it of the investigation before proceeding to the National Bureau of Investigation Central Visayas office to seek its assistance.

Edward Villarta, NBI director for Central Visayas, said he received a letter from the DENR seeking assistance. But he said he would first wait for a team from the NBI central office’s environmental and wildlife section, which was expected to arrive today, before starting the investigation.

Villarta said the probe, the first to be conducted in Cebu, would include the people involved the illegal ivory trade.

At the news conference, Palma said he spoke over the phone with Monsignor Garcia who told him that he had been misconstrued and that the article was exaggerated.

“He requested to see me. He mentioned that he was misconstrued and he mentioned (that the report was) exaggerated. He needs fair treatment, a fair hearing,” the archbishop said.

But Palma said he asked the archdiocesan commission on cultural heritage of the Church to look into the ivory collection of Garcia and check if these were acquired before the ban.

“Many of the artifacts were acquired hundreds of years ago, which means that from the perspective of the law may not be illegal. But let the commission spearhead any movement in this regard,” he added.

Palma said the committee would also do an inventory of the archdiocese’s own collection of ivory pieces. “We discourage the use of ivory, especially for new implements,” he said.

At the same time, Bishop Lito Cortes, CBCP chair on transcultural heritage, would come up with rules on ivory collections of the Church.

“They met in Manila and made guidelines. I will instruct him to make follow up actions in this regard,” the archbishop added. “They will come out with rules. It is too soon to tackle the implication.”

Palma said that as a rule he discouraged anything related to ivory and its illegal trade.

Palma, who took over as Archbishop of Cebu last year, said he didn’t have a background on the collections of the Garcia family.

“I had no time to interview him because he was sick. As far as I heard from some friends, these are antique collections,” he said.

Palma said many of these collections were acquired before the CITES (Convention on International Trade in Endangered Species of Wild Fauna and Flora), an international agreement that aims to ensure that trade in wild animals such as tiger and elephants, and plants does not threaten their survival.

Palma said the inventory should include Church-acquired ivory pieces, as he noted that Christy’s point remained valid. “We don’t kill for the sake of this kind of worship,” the CBCP president said.

He said he was a signatory to Peta’s “Free Mali” petition because he believed in the value of life.

“I was a signatory because I know the rationale behind [the petition]. My point is ‘we are and we should be very obedient and respectful of the law.’ That’s why, any illegal [act] for that matter should never be condoned,” the archbishop said.

Dakay said the archdiocesan commission would determine if Garcia’s ivory pieces were acquired before or after the ban.

If these were proven to be collected after the ban, these would be surrendered, Dakay said.

“We will surrender him (Garcia) also. Why not? We should stand up for what is right even if we are alone,” he added.

But Dakay said he doubted Christy’s claim that Garcia had taught him how to smuggle ivory pieces into the United States because the monsignor was never involved in smuggling.

He said Garcia’s ivory pieces might have been bought in Manila.

Among those who reportedly complained were people “who treated (Christy) so well, gave him Filipino hospitality thinking that he was writing about devotion, and got betrayed,” he said.

Palma said what Christy wrote was about ivory worship, not Cebuanos’ devotion.

The archbishop said the clergy had yet to discern if the archdiocese would write a letter of complaint to the magazine.

“On a personal note, it will not lessen devotion to the Sto. Niño,” he said. “I like to imagine, perhaps more people will come to Sto. Niño (during the annual fiesta) next year.”  With a report from Jocelyn R. Uy