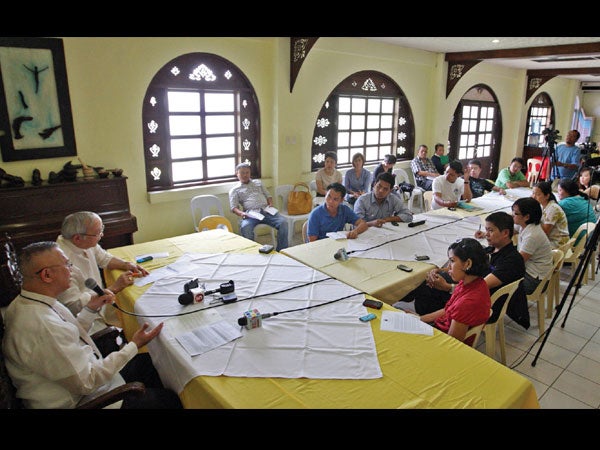 CEBU CITY—Msgr. Cristobal Garcia has been suspended and stripped of all his positions in the Archdiocese of Cebu on orders of the Vatican while the Holy See investigates the child abuse case that stemmed from accusations that he molested altar boys more than 20 years ago in the United States.

Msgr. Achilles Dakay, Cebu archdiocese media liaison officer,  said Garcia’s suspension happened months before the monsignor was implicated by a National Geographic article on the illegal trade of ivory in the Philippines.

Dakay’s announcement came after the Department of Environment and Natural Resources said that Garcia could face up to four years in prison unless he could show proof that he legally acquired his huge collection of religious icons made of ivory.

The National Bureau of Investigation said it was gathering evidence against those involved in the illegal sale of ivory, which an environmentalist lawyer calls the “new blood diamond” in the international trade.

NatGeo said the demand for ivory in the Philippines has resulted in thousands of deaths of African elephants.

Dakay said Garcia was suspended by Cebu Archbishop Jose Palma in June on instructions of the Vatican because of the ongoing investigation of the child abuse case filed against him.

As part of the penalties, Garcia is not allowed to say Mass in public and hear confessions, and  has been stripped of his positions in the archdiocese, including his chairmanship of the committee on worship.

Palma, president of the Catholic Bishops’ Conference of the Philippines, had informed Garcia about his suspension, which might have affected the latter’s health, Dakay said.

Garcia, a diabetic and hypertensive, is on sick leave. He was confined at a private hospital in Manila. Before that, he had been staying with a sibling in Manila while he sought medical treatment.

At a news conference at the Archbishop’s Palace here on Wednesday morning, Palma confirmed Dakay’s statement that Garcia had been removed from his positions in the archdiocese.

“You might notice you have not seen Monsignor Cris since June because he’s out of Cebu,” Palma said. “He is no longer connected with any of the post he occupied before.”

Palma said the investigation of Garcia’s child abuse case came long before the monsignor was embroiled in the controversy involving ivory trade.

“With regard to the matter of Monsignor Garcia’s past, the case has been elevated to the Holy See and it has initiated the investigation into it long before the present controversy erupted,” Palma said  in a prepared statement.

“I have also fulfilled the Holy See’s instructions regarding the submission of documents and acting upon related consequences,” he added.

Garcia was a Dominican priest working in the Archdiocese of Los Angeles in the 1980s when he was accused of child abuse.

He was later expelled after a nun reported to the police that an altar boy had been found in his bed in a Los Angeles rectory.

An article by The Los Angeles Times reported that Garcia was accused of molesting two youths in 1980 and 1984.

In a Dallas Morning News interview, Garcia was quoted as saying that he did have sex with the two altar boys but claimed that he was the one who was “seduced and raped.” His accusers, however, found his claims absurd.

Rosales brought him back

Garcia also claimed that his reputation had been tarnished because of his family’s wealth and that a cardinal had given him clemency after a review of a psychological report on him and materials from the Dominicans.

Dakay told the Philippine Daily Inquirer that what he knew was that Garcia was the last priest ordained by Cebu Archbishop Julio Cardinal Rosales before he died in the 1980s.

After Garcia was expelled by the Dominican Order, Dakay said Rosales brought him back to his hometown in Cebu and took him in the archdiocese as a diocesan priest.

But Dakay said Garcia could no longer go back to the United States after his conviction in the civil aspect of the case. He, however, didn’t know if Garcia was ordered to pay damages.

It was during the time of Cebu Archbishop Ricardo Cardinal Vidal, Rosales’ successor, that Garcia was named monsignor.

Garcia later became a high-profile priest in Cebu and has been known for his vast collections of religious icons, including Sto. Niño made of ivory, and paintings. His collections are usually displayed on exhibit every January as part of the festivities leading to the annual fiesta of Cebu’s patron, Señor Sto. Niño.

Garcia was also given various positions, including the chairmanship of the Commission on Worship. He was also business manager of “Bag-ong Lungsoranon,” the official publication of the Cebu archdiocese and spiritual director of Bukas Loob ng Dios and the World Apostolate of Fatima.

He was also a founder of the Society of the Angel of Peace in Talisay City, and rector of the Archdiocesan Shrine of Jesus Nazareno, also in Talisay.

Dakay said he thought the child abuse case against Garcia had been considered closed until Palma was informed by the Vatican about an ongoing investigation.

“He must have repented and was sorry for what he did because it was a sin. But the crime remained. The Vatican went on investigating it,” Dakay said.

“What happened in the States could be a crime. If it was also a sin on his part, it was forgiven. He had repented,”  Dakay said.

But he added the criminal case was elevated to the Vatican and was now the subject of an ongoing investigation.

Dakay said he didn’t know when the case was revived. “I don’t know why it reached the Vatican as a Church case.”

Dakay said Palma was appealing to the Vatican to soften the penalties on Garcia apparently due to the monsignor’s health condition and his contribution to the archdiocese.

Garcia left for Manila several weeks ago to seek medical treatment. He had been in and out of the hospital because of  hypertension and a heart ailment.

“He is now in hospital,” he added.

Dakay said Garcia, an expert in liturgy, had been printing the prayers of the archdiocese.

How to smuggle ivory

In his article titled “Ivory Worship” in NatGeo’s October issue, Bryan Christy, who visited the Philippines five times for the story, said Garcia advised him on how to smuggle religious icons made of ivory to the United States.

“‘Wrap it in old, stinky underwear and pour ketchup on it … so it looks shitty with blood. This is how it is done,’” Garcia told Christy.

Christy said Garcia also gave him the “names of his favorite ivory carvers, all in Manila, along with advice on whom to go to for high volume, whose wife overcharges, who doesn’t meet deadlines. He gave me phone numbers and locations.”

“If I wanted to smuggle an icon that was too large to hide in my suitcase, I might get a certificate from the National Museum of the Philippines declaring my image to be antique, or I could get a carver to issue a paper declaring it to be imitation or alter the carving date to before the ivory ban. Whatever I decided to commission, Garcia promised to bless it for me,” Christy said of Garcia’s advice to him.

Christy said that “a few families control most of the ivory carving in Manila, moving like termites through massive quantities of tusks. Two of the main dealers are based in the city’s religious-supplies district, Tayuman. During my five trips to the Philippines I visited every one of the ivory shops Garcia recommended to me and more, inquiring about buying ivory.”

Hide it in coffin

“More than once I was asked if I was a priest. In almost every shop someone proposed a way I could smuggle ivory to the US. One offered to paint my ivory with removable brown watercolor to resemble wood; another to make identical hand-painted statuettes out of resin to camouflage my ivory baby Jesus. If I was caught, I was told to lie and say  ‘resin’ to US customs. During one visit a dealer said Monsignor Garcia had just called and suggested that since I’d mentioned that my family had a funeral business, I might take her new, 20-pound Sto. Niño home by hiding it in the bottom of a casket. I said he must have been joking, but she didn’t think so,” Christy said.