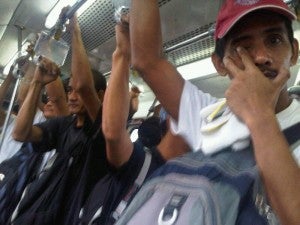 Passengers packed like sardines are an everyday occurrence at MRT trains plying Edsa. One of the two pickpockets who stole the cell phone of a Nepalese doctor on Monday at the MRT in Quezon City is now behind bars. PHOTO BY RICK ALBERTO

MANILA, Philippines—One of the two pickpockets on the prowl at the Metro Rail Transit is now behind bars after he stole the cell phone of a Nepalese doctor on Monday afternoon in Quezon City.

Unfortunately for Dr. Bishal Gautam, 28, his Samsung Galaxy Note was unrecovered even with the arrest of one of the two train thieves.

Darwin Hadlos, 24, was charged with theft for the loss of the cell phone worth P26,000 before the Quezon City Prosecutors’ Office on Tuesday. Also charged was his missing cohort, Donnie Malibiran, 30.

Chief Inspector Rodelio Marcelo, head of the Quezon City Police District’s Criminal Investigation and Detection Unit said Gautam was victimized by the thieves at around 5 p.m. Monday on the MRT from the Shaw Boulevard to the Quezon Avenue station.

Gautam is a resident doctor of the Rizal Medical Center in Pasig City.

Case investigator Police Officer 2 Anthony Tejerero said the doctor was listening to music on his cell phone during the train ride when the doctor felt someone shove him upon reaching the Cubao station.

At the Quezon Avenue station, Gautam noticed that music coming from his cell phone had stopped.

The man who shoved him turned out to be Hadlos, whom Gautam noticed to be holding his Samsung Galaxy Note and handing it to Malibiran.

The doctor immediately got off the train and sought the help of the Regional Public Safety Battalion’s PO1 Jerome Socorro, who promptly ran after Hadlos and nabbed him. Malibiran was able to evade capture.

Tejerero said the doctor was brought to the RPDB office at the Santolan MRT station where he identified Malibiran as Hadlos’ partner, based on the police rogues’ gallery.