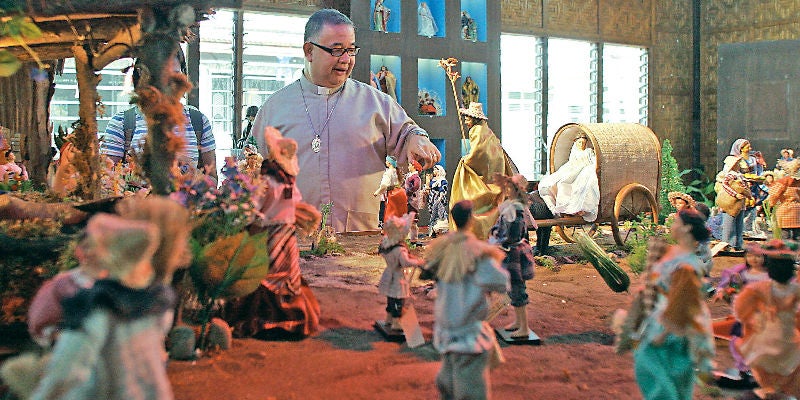 CEBU CITY—Msgr. Cristobal Garcia has always been proud of his collection of religious icons and paintings.

He displayed them  in exhibits during the weeklong festivities to celebrate the feast day of the Holy Child Jesus every third Sunday of January.

Some of the religious images can also be seen at the museum inside the compound of the Society of Angels of Peace, a congregation Garcia founded in Talisay City, Cebu.

His collections range from 300-year-old heirlooms to newly carved pieces, paintings, statues and “stampita” (scapular) bought in and outside the country.

So far, no one in Cebu can match Garcia’s collection. Those who know him say that he can very well afford these expensive art pieces.

Garcia, however, has come under fire following a National Geographic report that identified him as “one of the best known ivory collectors in the country.”

In the report, Garcia told NatGeo writer Bryan Christy how to smuggle Sto. Niño into the United States.

Louie Nacorda, a renowned iconographer and a friend of Garcia’s, acknowledged that the monsignor was keeping ivory pieces although he said he didn’t know how many as these were part of Garcia’s vast collection of religious figures, icons and paintings.

The same holds true with Garcia who can afford to buy ivory pieces whenever he goes out of the country, he said.

Nacorda said collecting paintings, icons and statues had become an expression of his and Garcia’s spirituality.

Garcia’s collection started when he was just 5 years old when his grandfather, Gil Garcia, gave him his first image—the Sto. Niño de Belen from Spain.

In an interview in 2008, Garcia recalled that he was at a store with his grandfather when he saw the Sto Niño sitting on hay and flowers, and encased in glass.

“I pointed to it and told him that that was what I wanted for my birthday,” Garcia said in a Cebu Daily News (CDN) article published on Jan. 13, 2008.

The gift led to a collection of more than 100 Sto. Niño paintings and icons.

Some of his collections, however, were given by friends, who had heard about his passion.

He also kept an image of the Sto. Niño de Praga, which he found in a trash can in Anaheim, California.

In another CDN article dated Jan. 16, 2005, Garcia explained that his collection was a consequence of his devotion.

Garcia, chairman of the Cebu Archdiocesan Commission on Worship, doesn’t hide his collections. He displayed them at the Cathedral Museum of Cebu two years ago as part of the activities leading to the fiesta of the Sto. Niño.

The other exhibit was held at Ayala Center Cebu.

Fr. Brian C. Brigoli, head curator of the Cathedral Museum of Cebu and vice chairman of the archdiocesan commission for the cultural heritage of church, recalled that Garcia handled everything—from the curatorial design to the equipment and fixture in the exhibit.

All those on display—about a hundred—were personal collections of Garcia.

But Brigoli said that none of these items was made of ivory, apparently for security reasons. He, however, said Garcia had told him that he had an ivory collection.

Brigoli said he was impressed by Garcia’s collection. “He was a serious collector,” said Brigoli. “No one can match his collection. It was extensive.”

Brigoli, a conservator, recalled that he conducted a training  program in Garcia’s congregation on how to preserve paintings. One of the paintings he saw was dated early 19th century.

“He told me about his passion for collecting. Whenever he goes to other places, he sees to it that he buys one for his religious collections. Even when he was still a boy, he used to collect things,” he added.

Brigoli explained that Garcia displayed his collection, not to brag about it but to use the exhibit as a “medium of education, medium for evangelization and source of enjoyment.”

He said the exhibit was Garcia’s way of showing and sharing his devotion with the Holy Child Jesus and inviting the people to share his faith.

In the CDN article four years ago, Garcia said he decided to hold an exhibit of his collection to share his faith.

“Looking at the image of the Sto Niño has taught me about who I am. He has invited me to a spiritual childhood which, as I said, has an effect on me,” he was quoted as saying.

Brigoli said he felt sorry for Garcia for how he was depicted in the NatGeo article.

He said Garcia should not be blamed because what he had in his possession was not the raw material of ivory—elephant’s tusks—but carved images that had been passed on several times and whose sources could not be traced any more.

Brigoli said Garcia did not have the connections to be able to smuggle ivory pieces from every country he had been to.