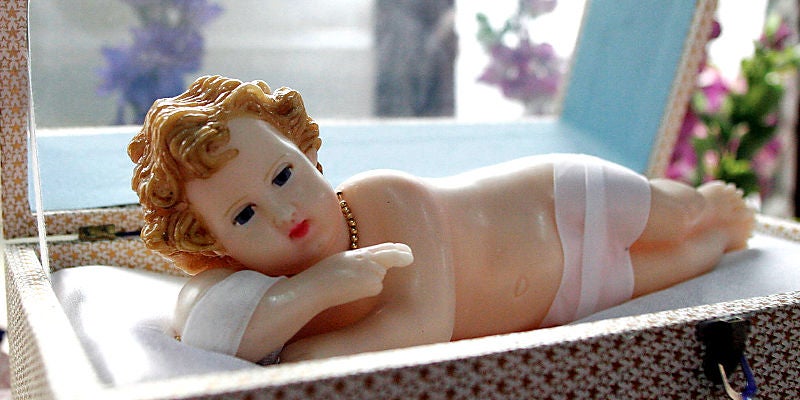 A Cebu priest known for his collection of religious icons carved from ivory may have incriminated himself with his revelations on the illegal trade in an investigative report appearing in the National Geographic and reported by the Philippine Daily Inquirer.

Msgr. Cristobal Garcia could face up to four years in prison unless he could show proof that his ivory collection was acquired legally, the Department of Environment and Natural Resources (DENR) said on Tuesday.

The NatGeo report, titled “Ivory Worship” and written by Bryan Christy, who visited the country five times for the report, said Garcia had even advised him how to smuggle religious icons made from ivory into the United States.

Mundita Lim, director of the DENR-Protected Areas and Wildlife Bureau (PAWB), said regional environmental officials launched a probe of the report that the priest was in possession of ivory Sto. Niño figures acquired using questionable means.

“He has to be able to show that he has a CITES permit from us,” Lim said, referring to the Convention on International Trade in Endangered Species of Wild Fauna and Flora.

She said the only “legal” ivory allowed in the country was the kind that was taken before the convention took effect more than 30 years ago.

“Otherwise we will charge him with illegal possession of ivory and illegal trade, if there’s evidence he is also involved in buying and selling,” Lim said in a phone interview.

She said the National Bureau of Investigation would take the lead in the filing of formal charges against Garcia and possibly others who might be involved if the investigation turned up sufficient evidence.

The NBI’s Environmental and Wildlife Protection Investigation Division (EWPID) has been following up information on the illegal trade of ivory tusks, Abigail Valte, deputy presidential spokesperson, said at a Malacañang briefing.

“The DOJ (Department of Justice) will be looking at the possible prosecution of those involved after the investigation,” Valte said, quoting Justice Secretary Leila de Lima.

Valte said the outcome of the NBI investigation, began even before the NatGeo news broke, would be crucial to the filing of charges against the illegal traders.

“The secretary of justice will be waiting for a final report from the NBI for the DOJ to be able to determine who are the personalities who will be up for possible prosecution,” she said.

Valte said that the Bureau of Customs, which last week intercepted a P48-million shipment of rhino tusks, was closely coordinating with the NBI.

NBI Director Nonnatus Rojas said a team from the EWPID, a division in the bureau tasked with handling environment-related cases, was sent to Cebu to gather statements and evidence against those involved in the illegal ivory trade.

Rojas said another team was conducting an investigation in Metro Manila.

“This is embarrassing to the country as it put us in bad light,  and those who will be found involved in the illegal trade will be immediately charged,” Rojas said.

Antonio Oposa Jr., an environmentalist lawyer, said he regretted that his hometown, Cebu, whose patron saint, the Sto. Niño, had been dragged into the illegal ivory business, which he described as “the new blood diamond of international trade.’’

“It saddens me to find out that my country, my hometown Cebu, and some of our people, including a man of the cloth, were allegedly involved in this despicable system,” Oposa said in a telephone interview.

He noted that the killing of large animals for their ivory tusks to satisfy a perverted whim was not one of the 10 Commandments.

Environment Secretary Ramon Paje said Garcia must show that Garcia’s ivory collection was antique, or acquired before 1981, the year the Philippines became a signatory to the CITES.

“Even though the CITES was signed in 1973 and took effect in 1975, in the Philippines, we will only allow ivory products pre-CITES or before 1981,” he told the Inquirer.

But Paje said that based on Garcia’s remarks as quoted in the NatGeo story, it seemed that at least some figurines in his collection came after 1981, meaning he might be liable for violations. “That’s why our regional offices and the NBI are now validating whether that report is true,” the environment secretary said.

Paje explained that any Filipino who owned an ivory product “pre-CITES” must still have it certified as an antique with the National Museum.

Asked if the authorities had a way of dating ivory figurines, he said there should be existing technology, but he was unaware if this was available locally.

The smuggling of elephant tusks only came to the DENR’s attention when shipments were intercepted in 2005 and 2009, according to Lim.

To her knowledge, ivory fetched a price of P1,000 per kilo at the time.

In his report that will appear in the October issue of NatGeo magazine, Christy said he met with Garcia, leader of a group of Sto Niño collectors in Cebu province, to understand the country’s ivory trade and to get a lead on those behind the 5.4 tons of illegal ivory and 7.7 tons that customs agents seized in Manila in 2009 and 2005, respectively, and 6.1 tons bound for the Philippines that Taiwanese authorities seized in 2006.

Christy said the seizures represented 1,745 elephants assuming an average of 10 kg of ivory per elephant.

Kenneth Burnham, statistician for the CITES program monitoring illegally killed elephants, said it was likely that poachers killed at least 25,000 African elephants in 2011. Globally, 34.7 tons of illegal ivory were seized last year, according to Christy.

Using an Interpol rule of thumb that seized contraband accounted for 10 percent of actual smuggling, Christy, a former international lawyer based in Washington DC, placed the number of elephants killed illegally last year at 31,500.

Of the tusks confiscated by customs officials in 2009, 4,681 kg were placed in the custody of the DENR, Lim said.

But a few months after they were placed in a PAWB storage room, 700 kg of the tusks were pilfered by a park superintendent at the Ninoy Aquino Parks and Wildlife Center, she said.

“He put PVC pipes so it would appear like the tusks. Fortunately, our inspector looked at them more closely,” Lim said.

The suspect, Medel Eduarte, went missing soon after the inspection, and was charged with qualified theft. He also faces grave misconduct and conduct prejudicial to the best interest of the service.

“In March 2012, a warrant for arrest was issued by the court against him,” Lim said.

She said it would be useful to capture Eduarte in order for government to learn of his contacts and other information on the illegal trade.

Lim said it appeared from the NatGeo story that the Philippines was not just a transit point for elephant tusks but also the “main destination” because of the demand for religious icons carved from ivory.

“It’s embarrassing because we are entered into an international commitment to protect wildlife, and it is widely known how endangered elephants now are,” she said.

“In the same way we want to protect the Philippine eagle and our other endangered species, we should be just as mindful of wildlife from other countries, like elephants,” Lim said.

She said the public must steer clear of ivory figurines to escape possible prosecution.