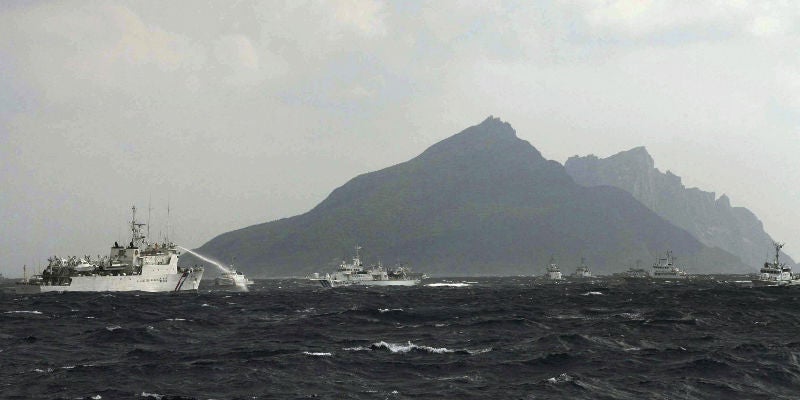 In this photo released by Taiwan’s Central News Agency, a Taiwan Coast Guard patrol boat, left, sprays its water cannon towards a Japan Coast Guard patrol boat off the disputed islands called Senkaku in Japan and Diaoyu in China, in the East China Sea, Tuesday, Sept. 25, 2012. On Tuesday morning, about 50 Taiwanese fishing boats accompanied by 10 Taiwanese surveillance ships came within almost 20 kilometers (about 12 miles) of the disputed islands- within what Japan considers to be its territorial waters. AP Photo/Central News Agency

TOKYO—Coastguard vessels from Japan and Taiwan duelled with water cannon Tuesday after dozens of Taiwanese boats escorted by patrol ships sailed into waters around Tokyo-controlled islands.

Japanese coastguard ships sprayed water at the fishing vessels, footage on national broadcaster NHK showed, with the Taiwanese patrol boats directing their own high-pressure hoses at the Japanese ships.

The large-scale breach of what Japan considers sovereign territory — one of the biggest since WWII — is the latest escalation in a row over ownership of the islands that pits Tokyo against Beijing and Taipei.

The intrusion complicates an already volatile territorial dispute with China, which is also locked in a separate row over the strategic South China Sea against claims by several nations including the Philippines.

Adding to the tensions, China’s first aircraft carrier entered service Tuesday, marking an expansion of its blue-water fleet that will bolster its military and diplomatic clout.

Beijing says the carrier will mainly be used for training and development purposes, but military commentators say China is developing strike aircraft and support vessels which would help it become fully operational.

Taiwan has said that officers aboard some of the patrol ships sent to the area were fully-armed elite coastguard personnel.

“We’ll do everything to protect our fishermen. We do not rule out using force to fight back if Japan were to do so,” Wang Chin-wang, head of the Coast Guard Administration, said in parliament.

A spokesman for Taiwan’s coastguard confirmed that nearly 60 boats got close to the islands, some coming within three nautical miles — well inside the 12-nautical-mile territorial zone.

Taiwan’s President Ma Ying-jeou on Tuesday voiced support for the flotilla’s “patriotic actions and acknowledges the coastguard for claiming our sovereignty while protecting the fishermen,” his office said in a statement.

“Ma urges the Japanese side to respect our fishermen’s rights in their ancestral fishing ground… and hopes that all parties involved will peacefully resolve the disputes to share the resources in the East China Sea.”

Japanese Chief Cabinet Secretary Osamu Fujimura said Tokyo has complained to Taipei about the move, but that Tokyo was handling the situation as delicately as it could.

“Japan’s position is that, in light of good Japan-Taiwan relations, we must solve the issue peacefully. We wish to respond calmly,” he said.

Tokyo later sent an envoy from the Interchange Association, the body that deals with Taiwan in the absence of diplomatic relations, to Taipei for talks.

Japan administers the uninhabited, but strategically well-positioned archipelago under the name Senkaku. Beijing says it has owned the islands for centuries and calls them Diaoyu.

Taiwan also claims the islands, which lie around 200 kilometers (125 miles) from its coast.

Ownership of the islands has become an important tenet of identity for all three claimants; the possible presence of energy reserves in the nearby seabed adds to the mix.

The last large intrusion into Japanese waters was in 1996, according to a spokesman at the Tokyo headquarters of the Japan Coast Guard.

He said at that time 41 ships carrying activists from Hong Kong and Taiwan entered waters around the islands with the intention of asserting sovereignty.

Relations between Japan and China have scraped long-unseen lows in recent weeks following Tokyo’s nationalization of three of the islands, which it bought from a private Japanese landowner.

Several days of sometimes violent protests erupted in cities across China, where Japanese businesses were targeted by rioters.

In high-level talks over the rival claims Tuesday, China told Japan it “must abandon any illusion” and that it will “absolutely not tolerate” violations of sovereignty.

Japan’s coastguard said Monday that of two of China’s maritime surveillance ships had spent seven hours in territorial waters around Uotsurijima, the largest island in the chain, in the latest of a series of incursions.