Pangilinan fumes, threatens to go back to Hong Kong: You’re so unruly 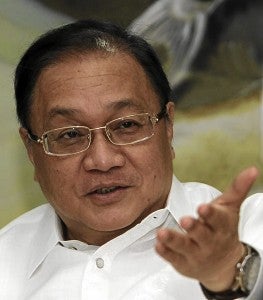 He threatened to leave the country after he was dragged into the feud between Foreign Secretary Albert del Rosario and Sen. Antonio Trillanes IV in connection with the dispute between the Philippines and China in the West Philippine Sea.

“Kung ako lang (If it’s up to me), I’d pack up and go back to Hong Kong. Ang gulo-gulo n’yo (you’re so unruly),” Pangilinan said in a phone interview late Wednesday night after being apprised of Trillanes’ charge that he was fanning Del Rosario’s anti-China stand as disclosed in the notes of former Philippine Ambassador to Beijing Sonia Brady.

Asked if he made the statement to let off some steam, Pangilinan was adamant: “You can print that. I’m really upset.”

Pangilinan was in Tokyo where he and the Philippine contingent of basketball officials suffered a big letdown when Fiba Asia picked Lebanon as host of next year’s Asia basketball championship.

Pangilinan is furious that Trillanes painted him and Del Rosario as rabble-rousers of sorts against China just to protect his company’s business interest.

First Pacific has a controlling stake in Forum Energy, which owns a majority of Service Contract No. 72 covering the oil and gas find in Recto Bank off Palawan province, an area  both claimed by the Philippines and China.

“I am no maverick. I have always placed the country’s interest above all else and

SC 72 will not be different,” Pangilinan said.

He came under fire for visiting China in May to meet officials of state-owned China National Offshore Oil Corp. (CNOOC) for a potential joint venture in Recto Bank.

Based on Brady’s notes, which  Senate President Juan Ponce Enrile read on the Senate floor on Wednesday, Trillanes claimed that Pangilinan wanted to create an event to divert attention from Reed Bank because the gas find there was not substantial (contrary to Forum Energy’s claim that it contained the country’s largest gas deposit, a volume way bigger than Malampaya’s).

“Mr. Pangilinan asked the Chinese group not to release findings because they needed time to recover their investment first and sell off to another buyer,” Enrile said, reading from the notes taken by Brady during one of her meetings with Trillanes in China.

Pangilinan is managing director and chief of Hong Kong-based First Pacific Group, owned by the Salim family of Indonesia whom the former Bancom executive convinced to invest a substantial chunk of its money in the Philippines following the 1986 Edsa Revolution.

Pangilinan said Trillanes’ allegations were preposterous because Forum Energy had yet to find a partner for SC 72 and CNOOC was only one of several options his group was considering.

He said neither CNOOC nor any other entity had full knowledge of the extent of the gas find, which was touted to be five times bigger than the Malampaya gas find and enough to serve the country’s natural gas demand for one century.

Pangilinan said that Forum Energy’s  report on Recto Bank’s potential was based on estimates subject to further confirmation and that nowhere did it declare that this potential was “bible truth.”

“We have four basic rules that we will follow in any commercial arrangement with China—any arrangement should not infringe on Philippine sovereignty; it should not violate Philippine laws and regulations; the commercial terms should be acceptable to both countries; and any contract should not be adversarial to the stand of the President. If we do not meet any of these rules, we will not enter into any contract,” he said.

Both Pangilinan and Del Rosario earlier argued that Trillanes’ claim did not make sense because a peaceful settlement with China would facilitate a potential deal with CNOOC.

The businessman said Trillanes had paid him a visit and requested him to tell Del Rosario to “quiet down.”

Pangilinan said that while he heeded Trillanes’ request, he told the senator that he could not dictate on Del Rosario’s actions or words because they were only “friends.”

Pangilinan said that he still could not explain why Trillanes would now use that meeting as proof that he was in cahoots with Del Rosario in his anti-China thrust.

The Brady notes also showed that Trillanes had accused Pangilinan of bankrolling a US lobby group to facilitate a “two plus two meeting” between Del Rosario and US Secretary of State Hillary Clinton presumably to sway the Americans into siding with the Philippines in its conflict with China over the West Philippine Sea.

Pangilinan confirmed the report that he was part of a lobby group,  the US-Philippine Society, which he said had noble goals to enhance relations between the two countries.

He said he was only one of several Filipino businessmen who joined an event of the group.