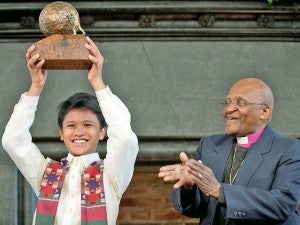 Thirteen-year-old Cris “Kesz” Valdez was once told he was the source of bad luck in the family. And for a while, he started to believe it too.

Beaten up by his father and neglected by his mother, the boy ran away from home and became a street urchin, scavenging through piles of garbage and spending his nights in an open tomb.

But now Valdez is the bringer of smiles to thousands of street kids like himself as the founder of “Championing Community Children,” an organization that gives flip-flops, toys and toothbrushes to deprived children in his hometown of Cavite City.

Out of three finalists, the boy was awarded on Wednesday the prestigious International Children’s Peace Prize at a ceremony in The Hague, where he received a 100,000 euro ($130,000) prize.

“My motto is, ‘we can change the world one heart at a time,’” Valdez said in an audiovisual presentation shown at the ceremony.

“My message to all children around the globe is: Our health is our wealth! Being healthy will enable you to play, to think clearly, to get up and go to school and love the people around you in so many ways.”

The prize is presented annually by a Nobel Peace Prize laureate to “an exceptional child, whose courageous or otherwise remarkable acts and thoughts have made a difference in countering problems which affect children around the world.”

An initiative of the Dutch organization KidsRights, the Children’s Peace Prize was launched during the 2005 Nobel Peace Laureates’ Summit by former Soviet leader Mikhail Gorbachev.

Asked about the prize money, KidsRights Foundation chair Marc Dullaert said a committee was now to decide, together with Valdez, to which projects it would be donated.

Valdez received the award from Nobel Peace Prize winner for 1984 Desmond Tutu, the South African human rights activist, who presented him with the “Nkosi,” a unique sculpture “which shows how a child can move the world.”

“You are wonderful,” Tutu told Valdez at a press conference shortly after the ceremony held in The Hague’s historic Knight’s Hall.

Tutu, the patron of KidsRights and the Children’s Peace Prize, said Kesz was a deserving and inspiring example of “a new voice for the voiceless.”

On his Twitter account (@iamKesz), Valdez posted on Thursday: “I am so honored to represent the Filipino kids and my homeland the Philippines! Salamat po O Dios sa lahat lahat (Thank you, Lord, for everything)!”

“I pray for the people who will listen to me speak. May I inspire them to do some good for the street children in the world,” he tweeted a day earlier.

Through his organization, which he started at age 7, Valdez and his friends visit underprivileged communities to hand out parcels called “Gifts of Hope,” containing, among other things, slippers, toys and even candy.

They teach children about hygiene, food and children’s rights. “He even takes things a step further, by teaching children how to teach each other. He has so far helped more than 10,000 children in his local area,” organizers of the prize said in a statement.

In the Philippines, almost 250,000 children live in the streets, subjected to abuse, violence and child labor, and many of them struggling with health ailments, according to KidsRights.

Valdez was in the same situation a decade ago.

At age 2, he was forced to scavenge at a dump. “I remember my father beating me. I had to make money so he could buy alcohol and drugs. He said I brought bad luck to the family,” he said in the KidsRights video, which has also been uploaded on Youtube.

Valdez said he felt he was “living in darkness.”

At 4, he ran away from the home and began living off the streets, sleeping in a public cemetery with other children, he recalled.

Then, an accident happened. While scavenging one night with other kids, he fell into a pile of burning tires, suffering a severe injury on his arm.

Love for the first time

That was when Valdez’s life turned around. For perhaps the first time in his young life, he became the recipient of the kindness of strangers.

Community worker Harnin “Bonn” Manalaysay, founder of the Bible study and outreach group Club 8586, treated the boy’s wounds and took the boy under his wing. Manalaysay was the mentor of another humanitarian working for street children, CNN Hero Efren Peñaflorida.

“That day was probably the first day in his life when he felt loved, accepted and cared for,” Manalaysay said of Valdez in the video.

On his seventh birthday, Valdez did not want any presents for himself.

“Instead, he wanted to give something to other street children,” KidsRights said. That same year, Valdez started his own organization, Championing Community Children.

Since its inception, the group has handed out 5,000 parcels and helped 10,000 children, KidsRights said. It said that Valdez himself had personally “treated over 3,000 wounds.”

Valdez, who studies in an open high school for other sponsored kids and dreams of becoming a doctor, said Manalaysay had not only treated his burns and bruises when his organization first adopted him but had also given him love and affection.

“This is what I want to give to as many street children as possible… I want children in the streets to get the same chance I had,” he said. With a report from AFP