Security outside US embassies around the world tightened 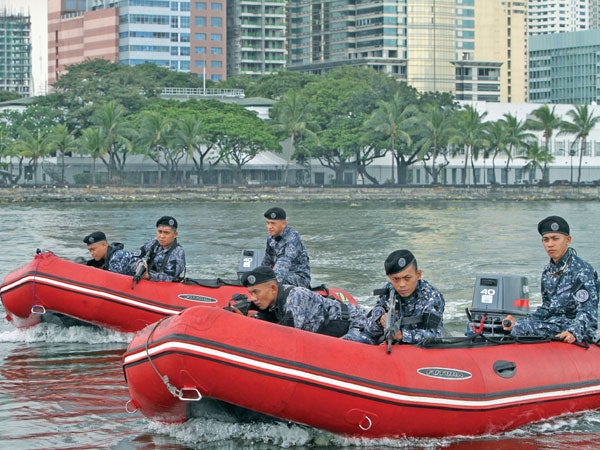 READY FOR ACTION A Philippine Coast Guard antiterrorist patrol secures the US Embassy from Manila Bay on Thursday, following an Islamist attack on the US Consulate in Benghazi, Libya, that killed US Ambassador Christopher Stevens and three other Americans on Tuesday. NIÑO JESUS ORBETA

Fearing violence, anxious governments across Asia on Thursday stepped up security outside United States embassies following an attack on the American consulate in Libya that killed the US ambassador and three other Americans.

In Manila, the Department of Foreign Affairs (DFA) pledged  security for foreign embassies and consulates in the country.

The Philippines is home to the Moro extremist group the Abu Sayyaf, which has been linked to various attacks in different parts of the country in recent years.

Guards and police special forces were seen carrying assault rifles outside the US Embassy in Manila.  Embassy guards gestured to a photographer to stop taking pictures.

US diplomats had asked for additional police personnel and patrols for the seaside compound and a nearby residential complex, as well as the American consulate in Cebu City, ahead of the anniversary of the Sept. 11, 2001, terrorist attacks in the US.

Officials said the heightened security would be maintained indefinitely.

“We mourn this tragic loss, and the families of our departed friends and colleagues are in our thoughts and prayers,” US Ambassador to Manila Harry Thomas Jr. said in a statement issued by the American Embassy.  “We will do our best to honor and carry forward their memory and their service.”

In the same statement, the US Embassy said it appreciated “the strong cooperation and support that we receive from the Philippine National Police and security authorities, and we remain open for regular business.”

It said that US consular services would continue for those with visa appointments and other concerns.

The DFA condemned the attack in Benghazi, Libya, calling it a “horrific criminal and senseless act of violence … which should be condemned by the international community.”

Elsewhere, Indonesia, the world’s most populous Muslim country, joined Afghanistan in demanding that YouTube block the crudely made film with its mocking portrayal of the Prophet Mohammed.

“The film certainly is offensive … and has upset Indonesian Muslims. We don’t wish for anyone to be provoked by it and for violence to break out here,” he said.

The low-budget movie depicts the Prophet Mohammed sleeping with women and dwells on themes of pedophilia and homosexuality.

So far, there has been no trouble in Indonesia, where most of the 240 million population practice a moderate form of Islam.

Reaction in Afghanistan, where US-led troops have been waging a decadelong war against the fundamentalist Taliban, has so far been muted. But unwilling to take a risk, President Hamid Karzai postponed his visit to Norway.

“He won’t go, he’s worried about possible riots over the release of the film,” a presidential aide said in Kabul.

In Pakistan, security was tightened around US diplomatic missions across the country, with officials saying they expected protesters to take to the streets.

“We have beefed up the security for the possible threats to the US Embassy,” said Khurram Rasheed, a senior police official responsible for diplomats’ security in Islamabad. “We expect some protests against the embassy tomorrow and we are preparing to handle that.”

India, which has the world’s third biggest Muslim population after Indonesia and Pakistan, issued an alert to security forces deployed outside US diplomatic missions.

In Bangladesh, which saw protests by tens of thousands of people against the publication of Mohammed cartoons by a Danish newspaper in 2006, authorities deployed more armed police at the US and other embassies. Reports from Tarra Quismundo, AFP and AP