Philippines only 2nd country to ratify ILO convention on househelp 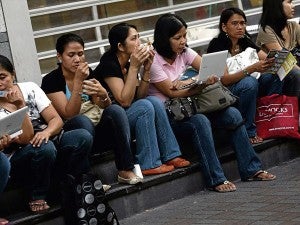 The Philippines has ratified a landmark international convention that seeks to protect domestic workers around the world, the Department of Foreign Affairs (DFA) said Thursday.

The Philippines is the second country after Uruguay to ratify the measure, a move seen as a “significant milestone in the protection of migrant domestic workers,” the DFA said Thursday.

Ambassador Evan Garcia, the country’s permanent representative to the United Nations in Geneva, on Wednesday formalized the Philippines’ ratification of the International Labor Organization (ILO) Convention 189, or the Convention on Decent Work for Domestic Workers.

More than 150,000 Filipinos work as household help in different parts of the world, particularly the Middle East, Europe and North America.

“This convention ensures the effective promotion and protection of the welfare and rights of all domestic workers, including our Filipino migrant household service workers,” said the DFA spokesperson, Assistant Secretary Raul Hernandez.

The convention stipulates standards that would ensure that domestic workers are treated with “the same respect, dignity and protection given to other workers,” Hernandez said.

No major migrant-receiving country, however, has ratified the convention so far, noted Migrante International, an organization of overseas Filipino workers.

There are around 53 million domestic workers worldwide but experts put the total number at 100 million as this kind of work is often unregistered, according to recent ILO estimates.

In developing countries, domestic workers make up at least 4 to 12 percent of wage employment, of which 83 percent are women or girls and many are migrant workers, the ILO said.

The ILO said the treaty would extend standards to a group which continues to be poorly regulated and remains largely part of the informal sector.

The convention lists basic rights for domestic workers, including reasonable working hours, weekly rest of at least 24 consecutive hours, a limit on in-kind payment, clear information on terms and conditions of employment, and respect for fundamental principles and rights at work, including freedom of association and the right to collective bargaining.

Garcia made the Philippine ratification official when it presented the Instrument of Ratification to ILO Director General Juan Somavia at the organization’s Geneva headquarters on Wednesday.

The convention, finalized last year by an ILO committee that the Philippine labor department chaired, will come into force in the Philippines next year, the DFA said.

On August 6, the Senate approved on third reading the resolution concurring the ratification of the convention with 20 votes.

In a statement, Somavia said the Philippine ratification of the treaty “sends a powerful signal to the millions of domestic workers who will be protected when the convention comes into force.”

Somavia said he was hoping to see more and more countries committing to protect the rights of domestic workers.  With a report from Ana G. Roa