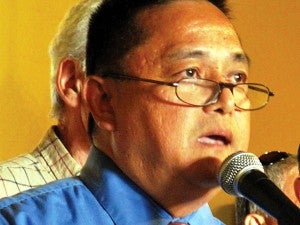 SAN LEANDRO, Bay Area, California—In  this multi-ethnic city of 85,000, an immigrant from Cabuyao, Laguna (23 miles south of Metro Manila, Philippines) hopes to be elected the first Filipino member of the San Leandro City Council on November 6.

Hermy Almonte, running for the District 6 seat against current councilmember Jim Prola, is set to reenact his November 2008 landslide victory in the race for the Area 1 seat of the San Leandro School Board.  The margin of 3,800-plus votes he wielded against the incumbent not only gave Almonte a clear mandate, but also the distinction of becoming the first Filipino to serve the school board of a city, whose demographics began to diversify only in the ‘80s.

The upset was more than just a redemption for Almonte, whose first foray into American politics was a failed attempt at a city council seat in the June 2008 elections.  The  win five months later thus gave him greater impetus to draw the best out of himself as  public servant and, equally significant, a pro-people team player.

“As San Leandro School Board vice president, I made hard choices to balance budgets and preserve student programs,” Almonte said at his campaign kickoff  Wednesday, August 22, in San Leandro’s Zen’s Cuisine.  “I supported the successful bond to renovate school athletic fields and collaborated with my colleagues to complete the construction of the ninth grade campus and Arts Center, within budget and on time.”

But despite the board’s brilliant performance and, thus, his excellent chances of being reelected in November, Almonte opted to pursue a higher calling at City Hall, and filed his candidacy for the city council.

“I am giving way to other parents and members of the community to serve San Leandro students,” he pointed out.  “But more than that, I am running for city council because there are community needs that need to be addressed.  I know those needs; more important, I know how to answer them.”

Almonte is running on the platform of “Real Reform for San Leandro,” one that is founded, according to him, on integrity and fiscal discipline.

Almonte also promises to introduce reform to the city’s pension program if elected.  San Leandro, he said, is spending $13 million annually – or almost 20 percent of total city revenue – on employee pensions.  “The city cannot afford to continue to pay 100 percent of employee pension costs,” he rued.

He continued:  “Funds that should be spent on fixing our streets, keeping libraries and pools open, and maintaining senior services so vital to keeping San Leandro a wholesome place for retirees to live ….. all are being used for employee pensions.”

Just as critical, Almonte added, is the need to hire more police officers — an investment in public safety which the city can only ill-afford, partly because, again, of the heavy strain employee pensions are putting on the city budget.

And he is wary.

“Two residential burglaries occur every day in San Leandro,” he said.  This is unacceptable.  We must hire more police officers and step up efforts to keep our neighborhoods safe.”

Yet for him, public safety does not only involve the commission of a misdemeanor or outright crime.  Omission of otherwise crucial things that people tend to overlook constitutes community endangerment just the same, which, Almonte insists, he will bring to the fore at the city council:  wheel-chair accessibility, bus stops without waiting sheds, crosswalks for children and wheelchair-bound individuals, and missing traffic and pedestrian signs, among others.

He said he will also look into one aspect of community welfare that is very close to his heart:  housing, especially for seniors, teachers, working families, and people with medical challenges.

Almonte is senior property manager overseeing and supervising the day-to-day operations of a senior housing facility in San Lorenzo and a family housing in San Leandro.