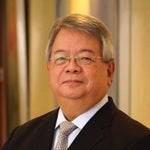 MANILA, Philippines—Philippine-China relations could get a boost from the private sector initiatives even with Manila standing its ground on the dispute over the West Philippine Sea, experts said at a Makati Business Club (MBC) membership meeting in Makati City.

Individual projects by private companies are good, they help maintain relations without giving away the Philippines’ claims, which only the government can decide on, according to MBC chairman Ramon del Rosario Jr. Speaking after the meeting, he cited as an example the efforts of businessman Manuel V. Pangilinan to consider possible cooperation with state-owned China National Offshore Oil Corp. (CNOOC) on the exploration of Recto Bank.

Pangilinan has said Philex Petroleum Corp., which he chairs, is ready to abandon a proposed partnership with CNOOC on the Recto Bank if the sovereignty or commercial issues are not resolved to the satisfaction of his group and the Philippine government. Philex Petroleum is a subsidiary of Philex Mining.

More than the energy project, however, the agriculture sector, particularly banana exporters, was hit hard by the dispute. Since March this year, China has tightened entry rules for Philippine bananas. Reports have even reached banana exporters that the Latin American country of Ecuador had had talks with the Chinese government to fill the void left by Philippine bananas, which are more difficult to get into China due to claims that the fruits carried diseases.

China has also issued a travel advisory against the Philippines earlier this year but authorities have reported that tourists from China and Hong Kong still come to Manila despite the notice.

Despite continuing trade promotion efforts, however, the Philippines should still strengthen its capacity to defend its borders whether in the case of territorial disputes or simply fighting off piracy and poaching, said Jose Almonte, former National Security Adviser and director-general of the National Security Council.

Chito Sta. Romana, former Beijing bureau chief of ABC News, said Philippine-China relations have reached “the lowest ebb” since the establishment of diplomatic ties in 1975, and China would remain a major challenge for Philippine diplomacy in the future given its size and proximity to Manila.

“It is important for us to study and understand what is happening in China. This is necessary so that we will know how to deal with China and how to develop and maintain normal and friendly relations with our big neighbor,” Sta. Romana said.

Experts point to at least three underlying issues in the dispute between the Philippines and China: the sovereignty or territorial issue over the Spratly islands and the Scarborough Shoal, as well as the maritime zones from these islands or reefs; the economic issue on who has the right to exploit the resources in these islands or the surrounding waters and seabed; and the strategic or geopolitical issue on who will control the important sea lanes in the South China Sea, which the Philippines calls West Philippine Sea.

China is in the midst of a once-in-a-decade leadership transition and a new line of leaders is expected to emerge in the upcoming Communist Party Congress. Moreover, the Communist Party has been going through an intense factional struggle as manifested in the sacking of Bo Xilai, the Politburo member who was originally expected to rise to the country’s top leadership body, Sta. Romana said.