No doubting Thomas when it comes to Filipino grit 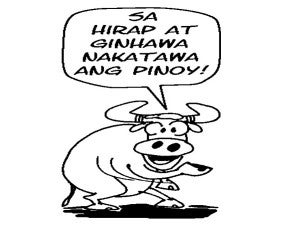 He’s no doubting Thomas when it comes to Filipino resilience in the wake of the flooding that displaced thousands of families in Metro Manila and other parts of Luzon.

“It is good to see you all safe and sound. Bilib ako sa inyo,” US Ambassador to the Philippines Harry Thomas Jr. on Thursday told evacuees at St. Francis Chapel in Cainta, Rizal province.

His line in Filipino, delivered with a twang, drew loud applause.

“Once again, you have shown us your extraordinary courage and resilience, ang inyong tapang at kakayahang bumangon,” Thomas said.

He later said that the Filipinos’ ability of making do in the midst of a disaster showed their “extraordinary courage and resilience.”

That resilience was exemplified by Jaylee Santillan and her family who have a mobile sari-sari store, their only source of income.

As the Manggahan Floodway swelled amid monsoon rains almost two weeks ago, Santillan and her family scrambled to flee a chest-deep flood, moving their valuables and their sari-sari store.

In their second week at Kabisig Elementary School, which was turned into an evacuation center, Santillan’s little retail corner store where it’s business as usual, offers evacuated families variety from the usual relief pack fare: A selection of hygiene products, coffee, milk and the best-seller, cigarettes.

“My husband does not have a job. This is our only means of income. It’s good that they allowed us to run our sari-sari store as long as we don’t sell canned goods and liquor,” Santillan said  in Filipino, while tending to her store on the ground floor of the school.

Close to 600 families have remained at the evacuation center since moving there last week.

“We have to earn because two of my children have to go to school,” said Santillan, whose two elder children go to high school in Pasig.

In another corner, social worker Rina Nato is on the lookout for infants who may go hungry, saying some mothers would leave their babies to the care of relatives without leaving them milk.

“Their mothers leave to look for money. So, I decided that since I’m also breast-feeding, I could breast-feed the babies here for the meantime,” said the 33-year-old mother of a 3-month-old.

With the government’s campaign for breast-feeding, formula milk may not be given as aid in evacuation centers, she said. Hence, mothers are required to feed their babies only breast milk.

She assured the public that what she decided to do was safe for the babies and herself.

“Ang inyong kalagayan ay mahalaga sa amin. Sana ay makabalik kayo sa inyong dating buhay sa lalong madaling panahon (Your welfare is important to us. I hope you will get back to 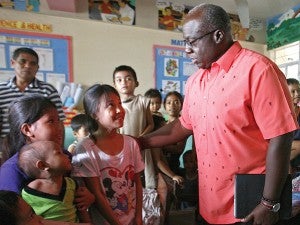 UNSINKABLE US Ambassador Harry Thomas visits an evacuation center in Cainta, Rizal, on Thursday where he sees close up the unsinkable spirit of the Filipino. RAFFY LERMA

your normal lives as soon as possible),” Thomas said  despite a heavy accent, prompting an eruption of applause from the crowd.

The first to give relief assistance in the amount of P4.3 million after last week’s floods, the United States extended an additional P16 million to support government relief efforts in Luzon, the ambassador said.

Thomas hailed the Aquino administration’s response to the disaster as he vowed that the United States would continue to support Philippine disaster-related programs, from prevention to response.

“I would like to salute President Aquino and his Cabinet for his robust response to the typhoon. Just a wonderful job. They are well prepared, and I would like to commend the President’s long-term vision on what needs to be done to prevent this from happening again,” he said.