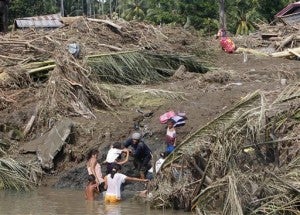 The Philippines ranks third in terms of casualties and cases among 41 countries identified as key spots for nonearthquake-related landslides, according to a professor of hazard and risk at Durham University in the United Kingdom.

David Petley, lead author of the recently released study, ‘Global patterns of loss of life from landslides,’ also identified “the mountain chains along the western edge of the Philippine Sea plate” as among the global hotspots for landslides.

Published by the Geology journal, the study tallied a total of 32,322 deaths in 2,620 landslides around the world within a seven-year period.

“Landslides are a global hazard requiring a major change in perception and policy,” said Petley.

“There are things that we can do to manage and mitigate landslide risks such as controlling land use, proactive forest management and guiding development away from vulnerable areas,” he added. Inquirer Research