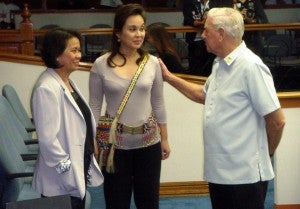 Visayan Forum’s Cecilia Oebanda (left) and Walk Free’s David Bussau (right) present a petition calling for the ratification of ILO Convention 189 by the Philippine Senate to Senator Loren Legarda. The petition gathered over 40,000 signatures from supporters all over the world.

MANILA, Philippines – Over 40,000 Walk Free supporters from 159 countries signed a petition to the Philippine Senate calling for the ratification of the International Labour Organization (ILO) Convention 189—otherwise known as the Convention Concerning Decent Work for Domestic Workers.

“I survived slavery and there was no law that lawyers could refer to when they tried to defend my rights against sexual abuse, torture and theft.

“Philippine domestic workers deserve to be protected from slavery like other people deserve to be protected from slavery. Our community needs global standards to protect children slaves and domestic workers. Only with laws to defend victims of this crime against people can be stopped and our community made into a better place,” says Veronique V., in a Walk Free message to the Philippine Senate.

Walk Free welcomes the ratification of ILO Convention 189 and congratulates the Philippine Senate for leading the international campaign to legislate for decent work for domestic workers.

Walk Free’s campaign started on June 15 in partnership with the Visayan Forum Foundation, when over 10,000 business leaders, philanthropists, community activists, law enforcers, government officials, politicians and victims of modern slavery were mobilized to Walk for Freedom at the Ayala Triangle, Makati City.

The walk set in motion a national social movement that challenged the prevailing sense of apathy and helplessness with the belief that together, modern slavery can be eliminated within this lifetime.

Galvanizing the success of Walk for Freedom, Walk Free mobilized online activists from the Philippines and around the globe, including the United States, the United Kingdom, Germany, Russia, South Africa, Vietnam, Brazil and Mexico, calling on the Philippine Senate to ratify ILO Convention 189.