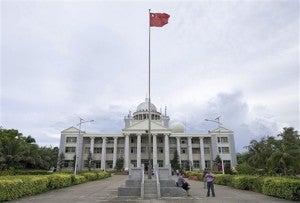 In this July 21, 2012 file photo, Chinese people chat in front of an administration office building for the Xisha, Nansha, Zhongsha islands on Yongxing Island, the government seat of Sansha City off the south China’s Hainan province. Beijing on Saturday, Aug. 4, 2012, summoned an American diplomat to express its dissatisfaction over US criticism of China’s new military garrison in the South China Sea. AP PHOTO

BEIJING—China has summoned a senior US diplomat over American criticism of Beijing’s decision to set up a new military garrison in the West Philippine Sea (South China Sea), in an escalating row over the tense waters.

Assistant Foreign Minister Zhang Kunsheng called in the US embassy’s deputy chief of mission Robert Wang on Saturday, the foreign ministry said in a statement.

It came the same day Beijing publicly lashed out after the US said China had raised tensions in the region with the announcement late last month it had established a new city and garrison in the disputed Paracel islands.

“The Chinese side expresses strong dissatisfaction of and firm opposition to it. We urge the US side to correct its mistaken ways, respect China’s sovereignty and territorial integrity.”

Zhang urged Wang to convey Beijing’s message to the “highest level” of the US government, the statement said.

The new garrison has infuriated Vietnam and the Philippines, which accuse Beijing of stepping up harassment at sea.

China says it controls much of the West Philippine Sea, but the Philippines, Vietnam, Brunei, Malaysia and Taiwan all claim portions.

State Department spokesman Patrick Ventrell said in a statement Friday the US was “concerned by the increase in tensions in the West Philippine Sea and are monitoring the situation closely.”

The new garrison and city run “counter to collaborative diplomatic efforts to resolve differences and risk further escalating tensions in the region,” he added.

The Philippines recently offered oil and gas exploration contracts in a disputed area of the West Philippine Sea, and in April was locked in a tense stand-off with China over a shoal.

Vietnam attracted China’s ire in June after it adopted a law that places the Spratly islands under Hanoi’s sovereignty. Both countries claim the islands as their own.