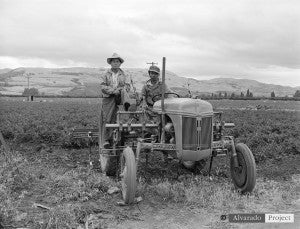 Alvarado’s daughter, Janet, co-curated with director of the Smithsonian’s Asia-Pacific American program, Dr. Franklin Odo. Fifty photos were chosen from more than 3,000 silver gelatin prints at the recent opening of the exhibit at the Pacific Hotel Gallery at History Park.

Janet says the negatives were found among her late father’s belongings after his death. At first it was doubted if they had any value. But experts said the photos provided a rare glimpse into a “gap” in Filipino-American history.

Most people forget that there were Filipinos in the US before the 1965 Immigration and Nationality Act. They worked in Hawaiian plantations, West Coast farms and some as far as the salmon canneries in Alaska. They were houseboys, cooks, bellhops, grocers, bakers and stewards. Many were veterans of World Wars I and II.

Some became citizens and returned to the US with brides. But even before World War II, they were banned from owning property and intermarrying with white women. Some married Mexican-Americans and other women of color.

There were few Filipino women in the US at that time. So many Filipino men remained bachelors or married at a late age. This is probably the reason why their era is known as the Manong Generation.

This marks the second time, since 1998 when the photo exhibit was shown, Janet says. When viewed today, the photos are starkly compelling. These are not tweets or stolen shots. None of them were shot by pranksters. The subjects are mostly poised or posed.

“Artistic and cultural,” Janet says. They not only record how people lived in the past (mostly California circa 1950) but also why Filipinos live the way they do today.

There are photos of forlorn migrant workers in farms – a way of life since there were few jobs open for Filipinos. If the war didn’t happen, who knows if that young lad who couldn’t smile would have been a teacher, a lawyer or a doctor? But the war came and he, like many other Filipinos, became a part of history. And fate made him a farmer.

Tilling the soil is hard enough. But when you have a fertile mind and some dexterity unfulfilled, you seek avenues of expression. Some of the manongs learned to play musical instruments, some became adept at new sports. Like the African-American before them, the new skills and never before discovered talents made them excel in something other than work. It also somehow eased the drudgery of manual labor and a hard life. And so the stage was set for the underemployed but over-achieving Asian-American.

Since Filipinos and others of color were not welcomed in white-only establishments, “house parties” were arranged. People of color would gather and party down at one of their member’s house, free from the discrimination. 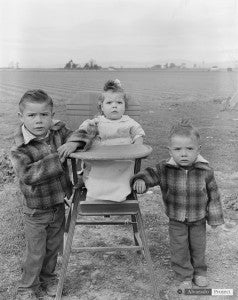 For fund-raising, the bachelor manongs would bid for boxes of lunch cooked by single ladies. The highest bid gets the gent a lunch and a dance with the lady who prepared the box.

Some things never change like picnics at Montara, even a lechon roasting in San Jose, first communions, baptisms and beauty pageants.

There’s a picture of the first Filipino Methodist church as it was at 2012 Sutter Street. Today, the Japanese Community Youth Council stands at that location.

There’s another of the first farmer’s market in San Francisco off 280. You can even make out the lower Bernal Heights district in the distance.

And another of the Telephone Market, owned by a Filipino couple at the corner of Pine Street between Baker and Lyon Streets. They served a mostly African-American clientele at the Fillmore district.

At South Park, Kearney, North Bush and South Market, Filipinos were very much a part of San Francisco diversity even at that time.

Janet does not know what made her father made photography his passion. “All he had was his fishing license and his camera. Maybe it was his GI bill.” Ricardo Alvarado served in the first Filipino regiment of the US Army in World War II. After the War, Alvarado worked as a cook at the Letterman Hospital in the Presidio. He clicked his last photo before marrying Norberta Magallanes from Leyte.