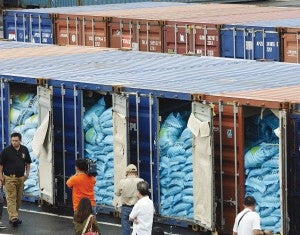 The National Food Authority (NFA) should be designated as the only entity allowed to import rice, a nongovernmental organization said Thursday, as it asked Congress to look deeper into the policy on rice importation by the private sector.

“This will help the government easily monitor potential rice smuggling even through the ports. The government would only need to honestly enforce customs administration,” said Aurora Regalado, convenor of the Rice Watch and Action Network (R1) in a statement.

The NGO said it supported the Senate investigation into rice smuggling to curb what Regalado described as the “age-old problem of rice smuggling.”

“Any move to achieve rice self-sufficiency will be for naught if we will allow our markets to be flooded with smuggled or imported rice,” Regalado said.

Citing data from the United Nations Commodity Trade Statistics, R1 said it found that 1.3 million bags of rice were possibly smuggled into the country based on exports data from Thailand, compared to the officially reported volume of imported rice received in the country’s ports in 2010.

“The difference in exports and volume of rice received in the ports from Thailand and Vietnam and are possibly smuggled into the country was even higher in 2009 at 2.32-million bags of rice,” the NGO said.

The Senate inquiry was prompted by the seizure of a shipment of nearly a thousand containers of rice, with an estimated market value of P450 million, that had been smuggled into the country from India and was abandoned at the Subic Bay Freeport in Zambales in April.